Biotech stocks have really sold-off in this risk-off market. With the Russell 2000 extremely weak right now it’s still too early to go long most penny stocks. However, biotech stocks have entered their seasonally strong time of year.

On the S&P Biotech ETF (XBI), the CMF is moving higher as we go into the strong time of year for biotech stocks. 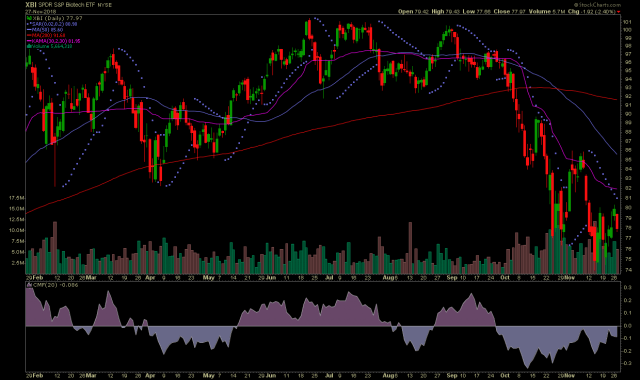 Here are two biotech stocks to watch over the coming days and weeks.

Clinical trial data releases have the potential to push biotech stocks to the moon and Sophiris Bio (SPHS) has a Phase 2 data release coming before the end of 2018. Topsalysin (PRX302) is for localized low to intermediate risk prostate cancer. Phase 2b complete data is due by end of 2018.

In the third quarter, Sophiris reported top-line six-month follow-up biopsy data from the final two patients enrolled in the trial with pre-identified, clinically-significant localized prostate cancer that were treated with a single administration of topsalysin.

The Company expects to have six-month follow-up safety and biopsy data from patients who received a second administration of topsalysin in its ongoing Phase 2b trial in localized prostate cancer patients by the end of December 2018. 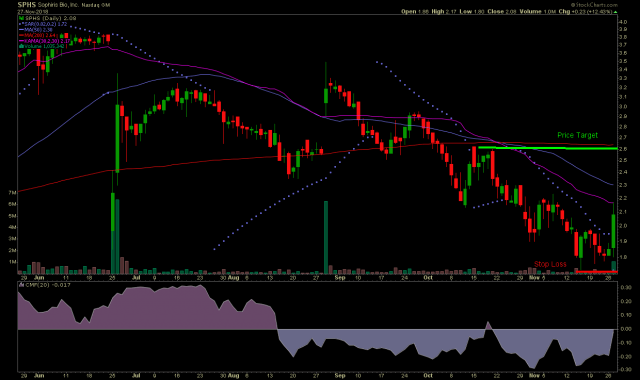 This next company doesn’t have an upcoming clinical trial data release or PDUFA event. Instead, they have a really cool product that the government seems very interested in.

The reason that AEMD stock was up +25% today is that the company announced that it has received a “Breakthrough Device” designation from the FDA to support the advancement of the Aethlon Hemopurifier® for the treatment of cancer. The Aethlon Hemopurifier is a first-in-class technology designed for the rapid depletion of cancer-promoting exosomes and life-threatening viruses.

FDA’s Breakthrough Device program was established under the 21st Century Cures Act to facilitate more rapid patient access to breakthrough technologies with the potential to address life threatening disease conditions for which no approved or cleared treatment alternatives exist.

“We are honored to receive this breakthrough designation in oncology as it establishes an opportunity to expand the market for our Hemopurifier and advance our vision for addressing a significant unmet need in cancer care,” stated Aethlon Medical founder and CEO, Jim Joyce. “By reducing the presence of tumor-derived exosomes from the circulatory system of cancer patients, we believe our Hemopurifier can improve the benefit of existing cancer treatment regimens and emerging immuno-oncology drugs. Thus providing a rationale for potential partnering opportunities.”

Cancer is the second leading cause of death globally and is estimated to account for 9.6 million deaths in 2018 (Source:World Health Organization). Tumor-derived exosomes, which are not addressed with an approved therapy, have been discovered to promote immune suppression, seed the spread of metastasis and inhibit the benefit of many leading cancer therapies. Aethlon has recently demonstrated the ability of the Hemopurifier to capture exosomes underlying several forms of cancer, including breast, ovarian and metastatic melanoma. 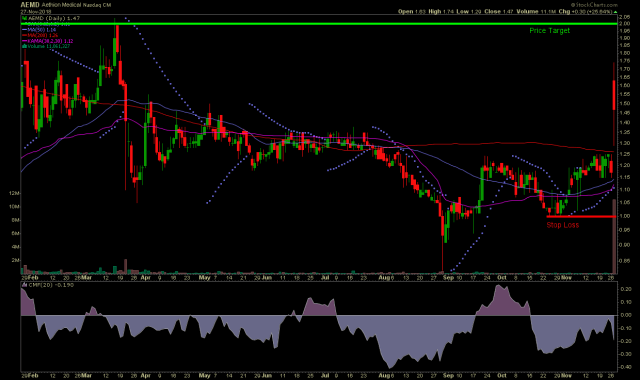 I don’t like the risk versus reward setup at the current price because AEMD has already had a big move higher but I do think this is a stock you should add to your watchlist.

Disclosure I do not hold a position in SPHS or AEMD.