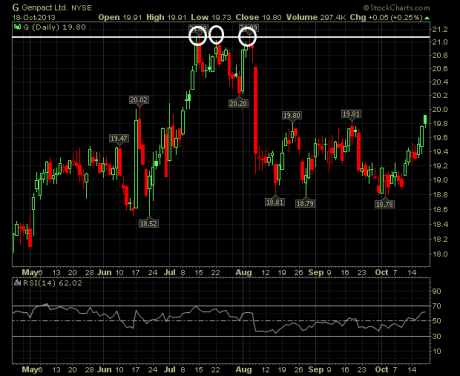 The Triple Top chart pattern is really demoralizing for Bulls. It means that a level of resistance is so tough, that Bulls tried not once, not twice, but three times to break through the resistance level but each time they were defeated by the Bears. Bears gain confidence that Bulls can no longer keep taking the stock higher and so they pile in and the stock usually plunges lower. 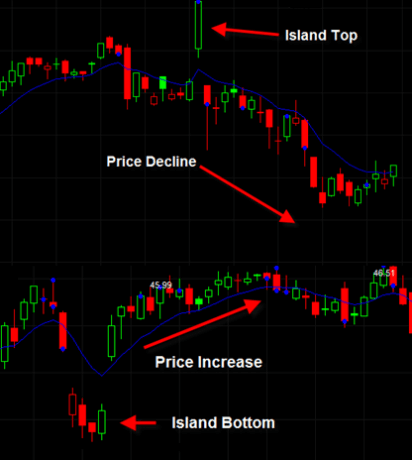 This is my favorite chart pattern to trade for huge profits. Some call this chart pattern a “flush”. It is a capitulation move by bulls who finally are squeezed out of a stock. Their panic selling causes the daily range on the stock to explode. The stock gets too cheap and within minutes, bargain hunters have stepped in to buy the bottom in anticipation for the next swing move up. The volume should drop off before the long lower shadow chart pattern appears.

The doji chart pattern represents indecision by either Bulls or Bears that they can continue to take the stock either higher or lower. The doji is a favorite chart pattern to trade for swing traders as it often signals a swing in the opposite direction. It is sometimes called a spinning top chart pattern.

The continuation chart pattern can lead to monster profits because these patterns continue for an extended period of time. It is one of my favorite day trading chart patterns as well. It can be a series of higher lows, higher highs, and even a consolidation or sideways move before a breakout.

The breakout chart pattern is my least favorite pattern because you are always chasing. Nevertheless, a breakout above resistance can be very profitable even if you are a little late to the Bull party. Breakout chart patterns are more accurate in a trending market (i.e. buy high and sell even higher). In the chart above, notice that often chart patterns will go through three stages: oversold, continuation, and breakout.

What are chart patterns?

There are three types of trading patterns: oversold, continuation, and breakout patterns.

What is a candle chart pattern?

Candlestick charting is one of the oldest forms of technical analysis that dates back to the 15th century.

Candlestick charting compliments existing chart patterns such as support, resistance, and trend-lines while adding a deeper level of insight into market sentiment beyond the high low bars that dominated western trading until recently.

What is a gap down chart pattern?

A gap is a change in price levels between the low and open of two consecutive days, where the open of the current day does not equal the close of the previous day so as to form a noticeable gap on the chart.

A gap down occurs when the opening price is lower than the previous day’s low.

What is a flag chart pattern?

What is a triangle chart pattern?

Ascending triangles often take a few weeks to form on the daily chart.

The Descending Triangle is often a bearish pattern that ends in a breakout to the downside. The Bears have been able to take the stock down to the support area on each swing while Bulls are losing the ability to take the stock back up to the resistance area each on each swing. A downtrend should already be in place for this to be considered a continuation pattern.

Unlike the Ascending Triangle (bullish bias) and the Descending Triangle (bearish bias), the Symmetrical Triangle pattern has no bias. It is a time of indecision where the Bulls and Bears are evenly matched. However, once the market figures out which way it wants to go, the pattern ends in a breakout either to the upside or the downside.

Sanjay Chowdary posted the video below on Ascending and Descending Triangle chart patterns. It is made for the FOREX market but the same principles hold true for equity markets.

PerfectStockAlert.com posted the video below on the Symmetrical Triangle chart pattern.

What is a head and shoulders chart pattern?

The price target coming out of the pattern can be estimated by taking the length of the highest point in the head to the neckline.

All of the same points hold true for a Head and Shoulders Bottom but the logic is reversed. It too is a continuation pattern until the breakout and then it becomes a reversal pattern. The Head and Shoulders Bottom has the mirror image or the reverse of a left shoulder, a head, and a right shoulder. The neckline is drawn at the peak of each shoulder.

What is a bearish engulfing candlestick chart pattern?

The bearish engulfing candlestick pattern is made up of two consecutive candlesticks: the first candlestick is an up day or green candlestick, while the second day is a down day or red candlestick.

The bigger the second down day candlestick is, the more bearish the reversal signal.

What is a diamond pattern in chart?

A Diamond pattern (aka Diamond Top Formation) is the end of an uptrend. It is a continuation pattern until the pattern ends with a breakdown below support and the lower trend wall of the Symmetrical traingle and then it morphs into a reversal pattern. The first half of the Diamond pattern is a Megaphone pattern or Broadening pattern, and the second half is a Symmetrical Triangle pattern.

What is the most successful chart pattern?

The most successful chart pattern is the oversold pattern. It works well in both trading and trending markets. However, what seems like an oversold level seldom is. This is why the oversold pattern must be used in conjunction with other technical and fundamental indicators, short interest days to cover, and catalyst research. The other technical and fundamental indicators are talked about in my other lessons. Make sure you subscribe below so you can get these lessons emailed to you.

What time frame should I use for the long lower shadow?

Use the daily (end of day) candlestick and a 6 month chart. A 6 month chart should be a long enough time span for you to see if the long lower shadow is occurring at a major support level.

If you are watching a stock in real time, then a long lower shadow will take place in intra-day action and it will most likely feel like a flush (the handle on a toilet going down then popping back up quickly). A flush is an excellent entry point.

Below are two charts of the same stock that formed a long lower shadow on the daily chart, and what it looks like in intra-day trading action.

Which time frame is the best for swing trading?

There are two time frames you will use for swing trading: the daily, and 1 hour.

The daily time frame is the time frame you use for your stock screener. A chart going back 6 months is good to use.

For example, in our stock screener we scanned for stocks with a long lower shadow:

Looking at the 1 hour chart, we can see that our next area of resistance after the flush is the previous day’s close up around $20 and so that is our target level.

If that range is too tight because there’s not enough meat on the bone for the amount of money you are trading with, we pass on the flush and go back to our daily stock screener and look for another stock that formed a long lower shadow.

What is short interest as a percent of float?

Short interest as a percent of float is the percentage of shares short in relation to the number of shares that make up a stock’s float. Float is just a shorter word used for “shares outstanding”.

The formula for calculating short interest as a percent of float is:

Many swing traders have developed trading systems that use short interest as a tool to predict market direction. The logic is that if everyone has shorted the stock (so that there is a high short interest as a percentage of float), then the stock is already near its low and will move up when short sellers have to cover their positions (buy back the shares to close out their short positions).

Do not confuse short interest as a percentage of float with the short ratio. The short ratio is calculated by dividing the number of shorted shares by the average daily volume of a stock:

Some traders prefer to use the short ratio because it provides a number that is used by traders to determine how long, expressed in days, it will take short sellers to cover their short positions.

What is a candle over candle formation?

In the chart above, GNCA has done a sweet flush, with a candle over candle reversal coming out of an RSI oversold, with a sweet volume spike. That’s beautiful.

Here’s a candle over candle formation that took 3 days to get the signal:

What Is the Best Chart Pattern To Trade

Folks, I’ve been trading for nearly 20 years and I’m going to tell you, hands down, without a doubt, what I think the best chart pattern to trade really is. I’m going to short cut your learning and what has taken me nearly 20 years to realize: the oversold chart pattern is the best chart pattern to trade. But be warned. The real problem with buying stocks that are oversold is that they rarely are oversold. You know the same old story, buy low, and sell even lower for a loss. You’ve also heard the old cliche, “Don’t try and catch a falling knife.” Stocks that move lower often continue to go even lower.

Follow me
Latest posts by Lance Jepsen (see all)