BYND stock rose 9% in after-hours trading on January 4, 2022, after the company announced a deal with the giant KFC.

KFC restaurants across the nation will add Beyond Meat’s (BYND) chicken substitute to its menus as soon as next week, Amelia Lucas and Kate Rogers of CNBC reported. The limited-time national launch follows testing from the Yum Brands (YUM) chain and Beyond to establish a meat substitute similar to the taste and texture of chicken breast. Source: https://www.cnbc.com/2022/01/04/kfc-to-launch-meatless-fried-chicken-made-with-beyond-meat-nationwide.html?utm_term=Autofeed&utm_medium=Social&utm_content=Main&utm_source=Twitter#Echobox=1641332739

On December 20, 2021, Beyond Meat, Inc. (NASDAQ: BYND), a leader in plant-based meat, announced that it has finalized the lease for a new, state-of-the-art R&D center in Shanghai, China as part of its larger global expansion strategy. With increased capabilities in science, technology and culinary arts, it will be the company’s first dedicated R&D facility outside of the United States. The facility will serve as a hub for innovation with a world-class team of scientists and researchers focused on developing high-quality plant-based meat products that cater to customers and consumers in the Asia-Pacific region.

The new R&D center will be equipped with state-of-the-art technology and cutting-edge lab facilities, including a pilot lab and sensory testing capabilities, that will allow Beyond Meat to create and iterate its products while bringing them even more quickly to market. In addition, a test kitchen will enable chefs and culinary experts to experiment with new products as the company continues to deliver on its reputation for rapid and relentless innovation. The facility is expected to open in the first half of 2022.

“The best-in-class R&D team we are building in Shanghai represents the next leg in our journey to become a global protein company,” said Dr. Dariush Ajami, Chief Innovation Officer, Beyond Meat. “This new resource will enable us to more precisely serve the palate of the Chinese consumer and contribute directly to the culture’s delicious cuisine while joining our global effort to deliver plant-based meats that are indistinguishable from, healthier than, and over time, priced at parity with their animal protein equivalents.”

Since Beyond Meat entered China last year, the company has been focused on scaling its distribution as well as increasing the efficiency of its operations with the opening of an advanced manufacturing plant in Jiaxing, the company’s first end-to-end manufacturing facility outside the United States. In food service, Beyond Meat has announced offerings with notable partners like Starbucks and KFC China, and in retail and e-commerce, the company has introduced the Beyond Burger®, Beyond Beef® and Beyond Pork™, the first innovation created specifically for the Chinese market. The new innovation center, coupled with increased production capabilities via the Jiaxing facility, will enable Beyond Meat to increase the speed and efficiency in which the company can bring to market localized products for customers in Asia.

Beyond Meat, Inc. (NASDAQ: BYND) is one of the fastest-growing publicly-traded food companies in the United States, offering a portfolio of revolutionary plant-based proteins made from simple ingredients without GMOs, bioengineered ingredients, hormones, antibiotics, or cholesterol. Founded in 2009, Beyond Meat products are designed to have the same taste and texture as animal-based meat while being better for people and the planet. Beyond Meat’s brand commitment, Eat What You Love™, represents a strong belief that there is a better way to feed our future and that the positive choices we all make, no matter how small, can have a great impact on our personal health and the health of our planet. By shifting from animal-based meat to plant-based protein, we can positively impact four growing global issues: human health, climate change, constraints on natural resources and animal welfare. As of September 2021, Beyond Meat had products available at approximately 128,000 retail and foodservice outlets in over 85 countries worldwide.

On December 16, 2021, Beyond Meat announced the appointment of Jorg Oostdam to the newly created leadership position of General Manager, Europe. With over two decades of experience in the food and retail sector, including a 15-year tenure at Mars, Incorporated, Oostdam will drive Beyond Meat’s expansion in Europe and accelerate its strategic growth worldwide. He most recently served as CEO for Zed Candy, where he relaunched the brand and expanded the business into 14 new markets globally. Oostdam will be based in the Netherlands and start with the company in February 2022.

📺 KFC to launch meatless fried chicken with Beyond Meat 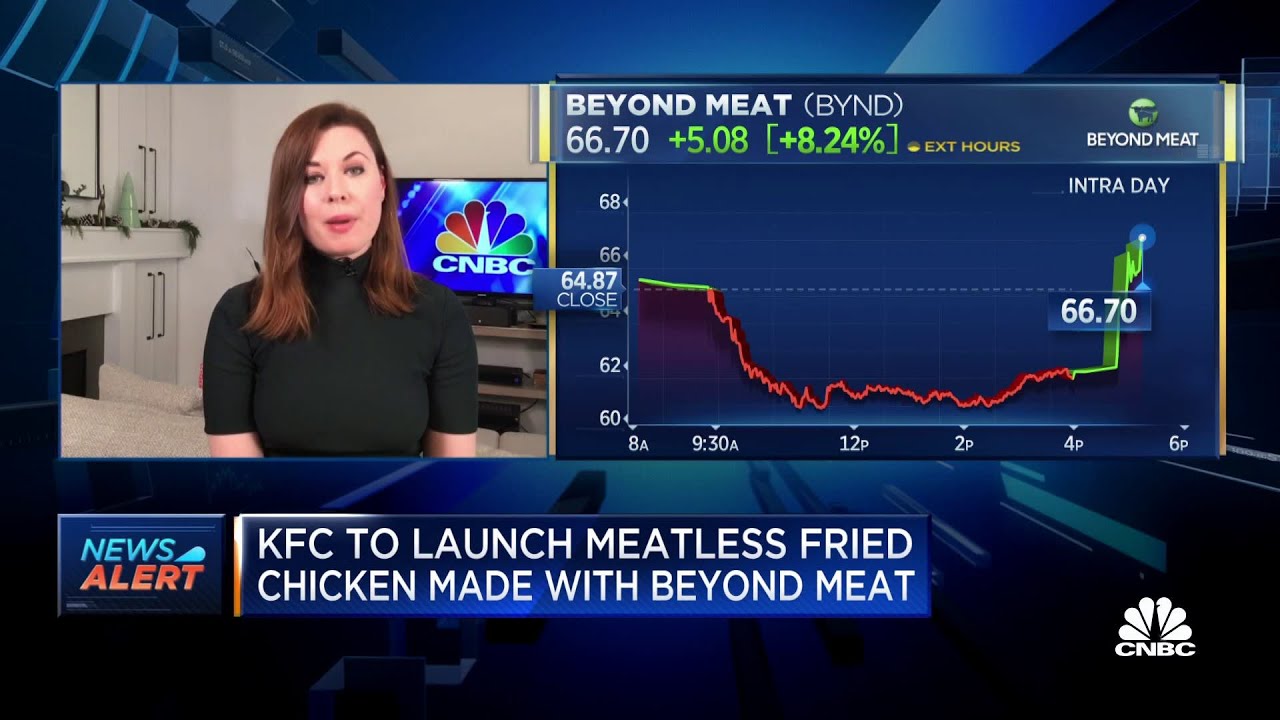 The short-term trend is negative, as is the long-term trend. BYND is one of the lesser performing stocks in the Food Products industry. 85% of 101 stocks in the same industry do better. BYND is currently making a new 52 week low. This is a very bad signal considering the S&P500 Index is trading near new highs. Prices have been falling strongly lately, it is better to avoid new long positions here.

The technical rating of BYND is bad and it also does not present a quality setup at the moment. Price movement has been a little bit too volatile to find a nice entry and exit point. It is probably a good idea to wait for a consolidation first. Click here to sign up for email alerts on when BYND stock consolidates and is a good long entry.