Biotech stocks are not doing well in this risk-off market. I would not recommend trying to swing trade biotechnology stocks because so much money is being pulled out of them as evidenced by IBB. However, Global Blood Therapuetics (GBT) was a big win for us last week as the stock popped 48% following news that the FDA will allow an accelerated approval pathway for voxelotor for the treatment of sickle cell disease (SCD), which will allow a faster potential approval of voxelotor. What happened in GBT is a reminder that even in a risk-off market, the best biotech stocks that have strong catalysts that will cause traders to abandon fear in the name of greed.

Below are a few biotech stocks with big events coming over the next few weeks.

“In the third quarter we completed enrollment in our Phase 2 PNH monotherapy trial of ACH-4471, initiated ten additional clinical trial sites to support our C3G development program, and commenced development of a comprehensive portfolio strategy that we plan to communicate to investors in December 2018. We also plan to provide interim data on all open-label ACH-4471 clinical trials as well as Phase 1 safety and pharmacokinetics interim data from the single ascending dose trials with our second-generation factor D compounds, ACH-5228 and ACH-5548,” Truitt noted. “We believe our innovative and differentiated factor D inhibitors have the potential to address unmet medical needs in patients with PNH and C3G as well as additional complement mediated diseases, together representing significant value-creation opportunities.” 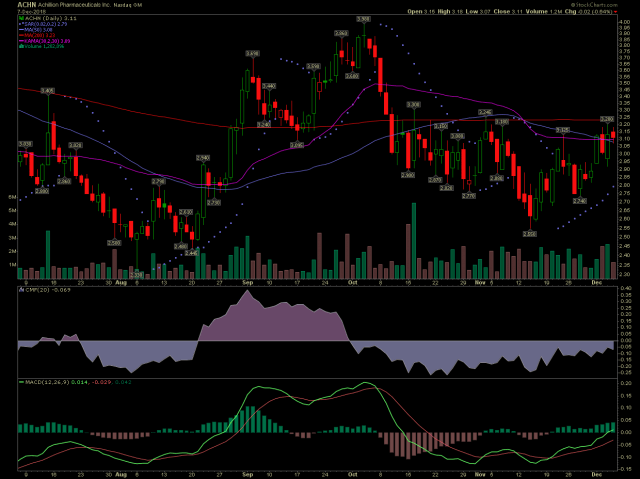 Buy-side volume is starting to pick up as the CMF continues to round up. I like the chart.

ADMA Biologics announced on October 11, 2018, that it has received a formal communication from the FDA stating that the FDA considers the Company’s recent response to the agency’s information request related to the Prior Approval Supplement (“PAS”) submission a major amendment. As a result, the FDA has informed the Company that they require an additional two months to complete their review of the PAS submitted in June 2018 to amend the Biologics License Application (“BLA”) for BIVIGAM®. The FDA has established a target action date of December 18, 2018 for the PAS under the Prescription Drug User Fee Act (“PDUFA”). 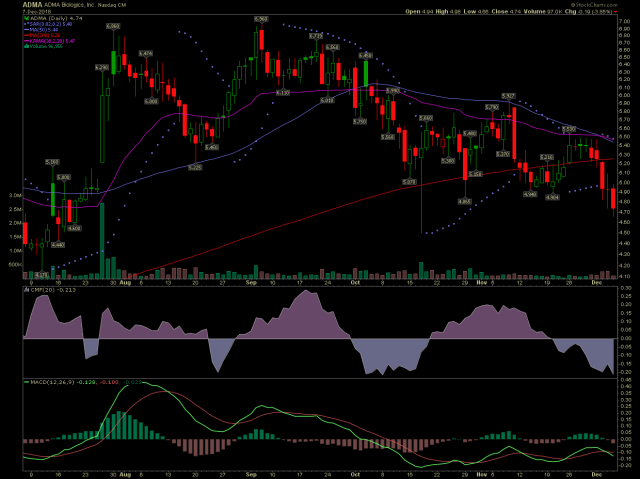 This chart looks horrible with the CMF falling and the MACD sell signal. 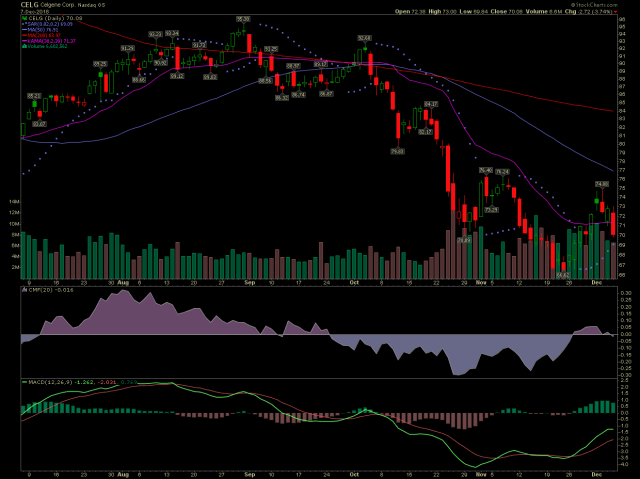 “We made meaningful steps this past quarter in both the clinical and corporate sides of our business, including completing enrollment in our ongoing Phase 2 clinical trial of exebacase and securing funding that extends our cash runway into the first quarter of 2020,” said Steven C. Gilman, Ph.D., Chairman and Chief Executive Officer of ContraFect. “In addition to these key milestones, our R&D team presented data on our lysins at scientific meetings and on a panel at a recent FDA-sponsored workshop during the quarter. This progress across our business gives us strong momentum as we look towards topline data from our study of exebacase later this year.”

In October 2018, the Company presented data from its exebacase (CF-301) program at ID Week, which compared the activity of exebacase against Staphylococcus aureus (Staph aureus) isolates from the patients enrolled in the ongoing Phase 2 clinical trial to the activity against contemporary surveillance isolates.

In September 2018, the Company completed enrollment in its multi-center, multi-national Phase 2 clinical trial of its lead lysin product candidate, exebacase, for the treatment of bacteremia and endocarditis caused by Staph aureus, including MRSA. As of the end of the third quarter, there have been no serious adverse events which we have determined are related to study drug. The Company continues to expect topline data from the study in the fourth quarter of 2018. 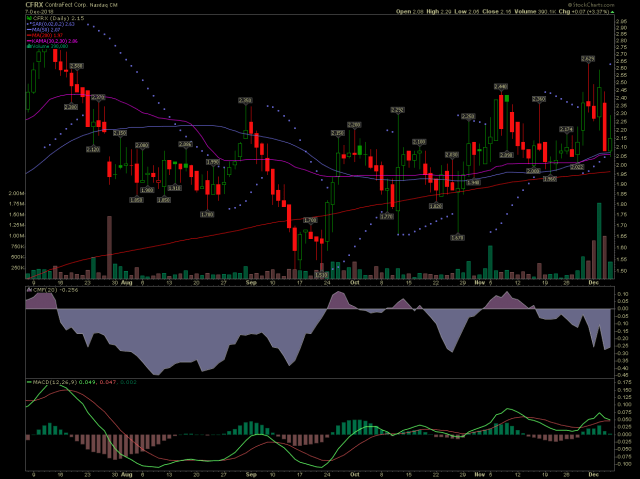 Not a fan of this stock chart with the CMF falling.

“With new drug applications for roxadustat in anemia associated with chronic kidney disease supported by positive Phase 3 results and under review in China and Japan, we look forward to the upcoming reporting of topline clinical results, pooled safety data and submitting our U.S. NDA,” said Thomas B. Neff, FibroGen’s Chief Executive Officer. “For pamrevlumab, our proprietary anti-fibrotic and anti-fibroproliferative therapeutic candidate, we are initiating Phase 3 studies in idiopathic pulmonary fibrosis, and in unresectable locally advanced pancreatic cancer, in the first quarter of 2019.”

Roxadustat for Anemia in Chronic Kidney Disease (CKD) in the U.S./EU

Roxadustat for Anemia in CKD in China

Roxadustat NDA approval for the treatment of dialysis-dependent CKD is anticipated by year-end 2018, followed by approval in CKD non dialysis
Clinical results from two Phase 3 studies conducted in China were presented at the American Society of Nephrology (ASN) Kidney Week 2018 annual meeting in October

Roxadustat for Anemia in CKD in Japan

Astellas NDA for roxadustat was filed with the Pharmaceuticals and Medical Devices Agency (PMDA) for anemia associated with dialysis-dependent CKD, triggering a $15 million milestone payment to FibroGen
Astellas announced positive topline results from the four Phase 3 dialysis-dependent studies that support the Japan NDA
Clinical results from two of the four Japan Phase 3 trials in dialysis-dependent patients were presented at the ASN Kidney Week 2018:
A Phase 3 trial in peritoneal dialysis patients was presented in an oral session
A Phase 3 darbepoetin alfa controlled study in stable hemodialysis patients previously treated with ESA was presented in a clinical late-breaking poster session
One of two non-dialysis-dependent Phase 3 studies supporting approval for non-dialysis is now completed
Pamrevlumab for Idiopathic Pulmonary Fibrosis (IPF)

Clinical and preclinical data presented at the European Respiratory Society International Congress (ERS) 2018 and 20th International Colloquium on Lung and Airway Fibrosis (ICLAF) 2018
Fast Track designation received from the FDA
Plan to start a randomized, double-blind, placebo-controlled Phase 3 clinical trial with a primary endpoint of change in forced vital capacity (FVC) from baseline in approximately 500 patients, in the first quarter of 2019
Pamrevlumab for Pancreatic Cancer

On track to start a randomized, double-blind, placebo-controlled Phase 3 study evaluating pamrevlumab in combination with gemcitabine and nab-paclitaxel as a neoadjuvant therapy for unresectable locally advanced pancreatic cancer (LAPC) in approximately 260 patients in the first quarter of 2019. 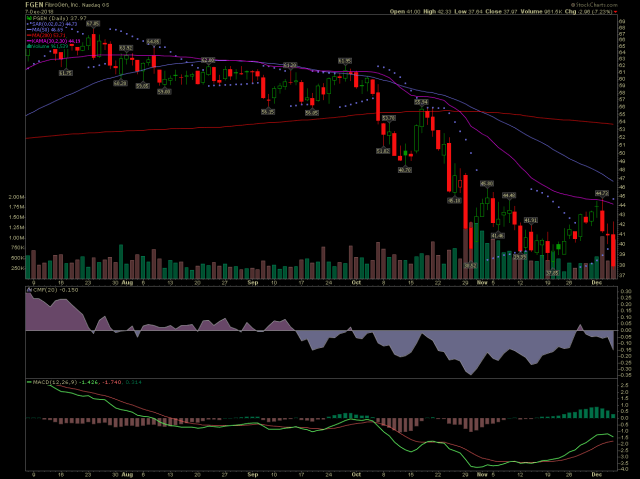 The company seems to have a lot going for it but it’s stock chart does not look good. Previous support has been broke and the CMF and MACD are both headed down.

The Company has completed enrollment in the IV only portion of the Magnolia study, a Phase 2 double-blind, placebo-controlled, dose-optimization clinical trial to evaluate ganaxolone in women diagnosed with PPD. The efficacy endpoint is change from baseline in the Hamilton Depression Rating Scale (HAMD17) score. The Company expects to provide top-line data by the end of December 2018. 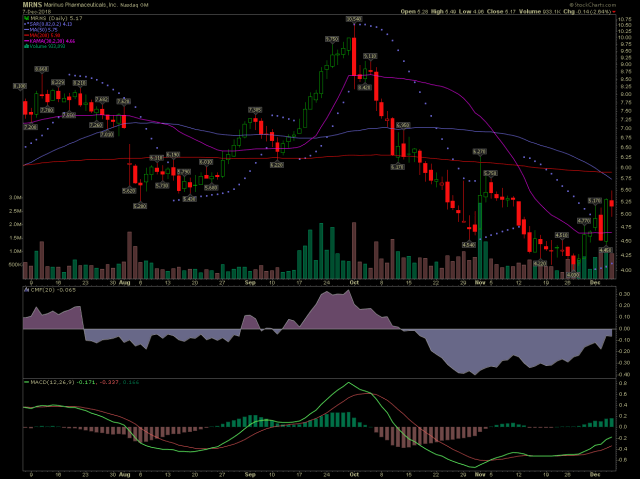 I like this stock chart because the CMF has been trending higher for since late October 2018. Buy-side volume is starting to pick up and MRNS stock could rip higher if the Phase 2 data is good.

Disclosure: I do not hold any position in any stock mentioned in this article.