Hillary Clinton and Democrats promised to wage war on pharmaceutical companies and do things like price controls on drugs and products of the biotechnology industry.

In California, there was a ballot measure to impose price controls on the sale of pharmaceutical drugs in the state.

Both Hillary Clinton’s probability of winning, and California’s ballot measure to impose price controls on the sale of drugs, weighed on pharmaceutical and biotechnology stocks leading up to the election.

Donald Trump did not promise a war on pharma. Trump promised increased funding for research and development and modernizing the FDA to ease the development, commercialization, and costs of bringing life-saving drugs to market.

Donald Trump won, and biotech stocks have been rallying ever since.

Democrats created shortages in the health care industry with ObamaCare, and they almost created the same shortages in pharmaceutical drugs. Let’s look at why price controls create market shortages.

A price control (or a price ceiling) occurs when the government puts a legal limit on how high the price of a product can be. For a price control to be effective, it must be set below the natural market equilibrium. 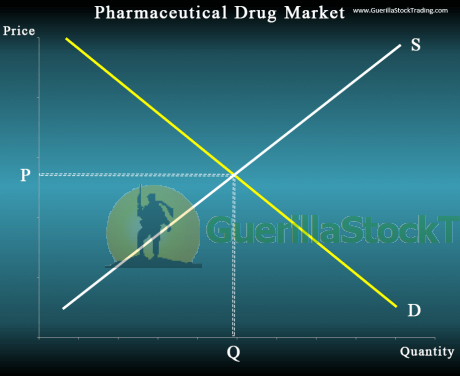 When a price control or price ceiling is set, a shortage occurs. The red horizontal line markets the price ceiling that is set by the government. The price control forces the price down from P to P2. At the lower price, more people can afford the drug and so the quantity of the drug demanded goes up from Q to Q2 (point A). The suppliers of the drug (pharmaceutical company) immediately cut back on supply (point B) as they are now paid below what the equilibrium market price established. Instead, these suppliers focus on supplying most of their drugs to other consumers, perhaps in other states that pay the full market price for the drugs they make. A shortage is created by the difference in the quantities of drugs demanded, versus the quantities of drugs supplied as illustrated by the shaded area. Shortages within the pharmaceutical industry would likely result in deaths, depending on the drugs needed. 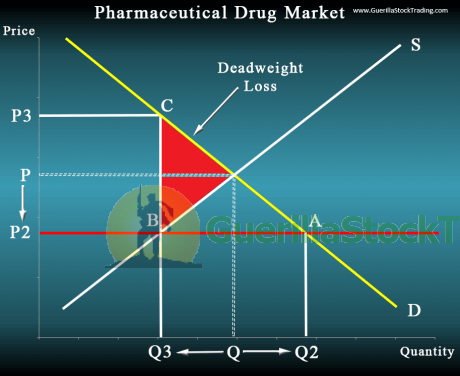 The government set a price ceiling of P2 and so quantity supplied contracted to point B. However, at that supply level, consumers would be willing to pay a price of P3. Since P3 is greater than P2, deadweight loss occurs. The deadweight loss is the elimination of trading between both suppliers and consumers.

Price controls are a bad idea. If the government sets a price ceiling, there will be a shortage. 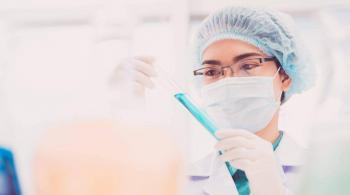