Bullish option flow was detected in TSLA stock on January 3, 2022.

On January 3, 2022, the WSJ reported that Tesla opened a new showroom in Xinjiang, a region of China where Chinese authorities are engaging in a campaign of forcible assimilation against religious minorities. The car maker started operations at the new showroom in Xinjiang’s Urumqu Capital, Lin notes, citing the company’s account on Weibo. Source: https://www.wsj.com/articles/tesla-opens-showroom-in-chinas-xinjiang-region-at-center-of-u-s-genocide-allegations-11641214630

On January 3, 2022, Morgan Stanley analyst Adam Jonas keeps an Overweight rating on Tesla with a $1,200 price target after the company reported Q4 unit deliveries roughly 15% ahead of consensus. This annualizes to over 1.2M units before the contribution from the Austin and Berlin factories, says the analyst, who expects the two to be “far larger” plants than Fremont and Shanghai. It’s not just the unit beat in Q4, but the favorable economics from reducing the proportion of vehicles coming out of Fremont, Jonas tells investors in a research note. The analyst estimates the Fremont plant has 20% gross margin and Shanghai has 40%, but he believes the opening of the Berlin and Austin plants “offers an opportunity to achieve even higher gross margins.” While 2M units in 2022 remains a “stretch target, it looks “far more realistic” following the Q4 deliveries, says Jonas.

On January 3, 2022, RBC Capital analyst Joseph Spak raised the firm’s price target on Tesla to $1,005 from $950 and keeps a Sector Perform rating on the shares. Record Q4 deliveries of 308,600 and strong production well exceeded expectations, Spak tells investors in a research note. The analyst expects shares to start the year off strongly, but notes that 2022 results are ultimately most dependent on the pace of capacity expansion.

On January 3, 2022, Wedbush analyst Daniel Ives notes that Tesla announced its Q4 delivery number which beat even the bull case whisper number on the Street, reporting 309,000 deliveries versus the Street’s 266,000 and bull case whisper in the 275,000s. This was a “trophy case” quarter for the company, with “massive momentum” moving into 2022, the analyst contends. Ives notes that the strength was driven by robust Model 3/Y sales of 297,000 versus the Street of 252,000 with Model S/X of 12,000 versus the Street’s 13,000. Total production in the quarter was 306,000 and was roughly 20,000 ahead of his estimates. With the chip shortage a major overhang on the auto space and logistical issues globally, these delivery numbers were “jaw dropping” and speaks to an EV demand trajectory that looks robust for Tesla heading into 2022, Ives adds. The analyst has an Outperform rating and a price target of $1,400 on the shares. His 2022 bull case target is $1,800.

On January 3, 2022, JPMorgan analyst Ryan Brinkman raised the firm’s price target on Tesla to $295 from $250 and keeps an Underweight rating on the shares. The analyst increased estimates after Tesla reported “much stronger than expected” Q4 deliveries. Tesla delivered 308,600 vehicles in Q4, far above the consensus of 265,701 and the 227,586 Brinkman had modeled at the time of the Q3 results. The analyst now forecasts Q4 earnings per share of $2.22, up from $1.54 prior and above the Bloomberg consensus of $1.98. He extrapolates the higher rate of Q4 deliveries into future quarters also, resulting in more operating leverage than previously modeled.

On January 3, 2022, Bernstein analyst Toni Sacconaghi notes that Tesla reported better-than-expected Q4 deliveries of 309,000, up 71% year-over-year and 16% higher than consensus expectations and higher than prevailing whisper numbers. Full year 2021 deliveries were 936,000, up 87% year-over-year, well ahead of Tesla’s target of “greater than 50%,” he adds. The analyst acknowledges that the delivery number is “impressive,” reflecting improving capacity in existing facilities and high-capacity utilization, despite industry wide component and supply chain challenges. Demand indicators remain strong for Tesla, particularly in the U.S., Sacconaghi points out, arguing that given volume leverage and price increases, he suspects the quarter will deliver strong profitability and sees several structural forces that should help gross margin in 2022. Nonetheless, while he acknowledges Tesla’s success and sees continued near-term stock appreciation as likely, Sacconaghi continues to struggle to justify the company’s valuation. The analyst has an Underperform rating and a price target of $300 on the shares.

📺 Here’s what to watch for in Tesla’s stock 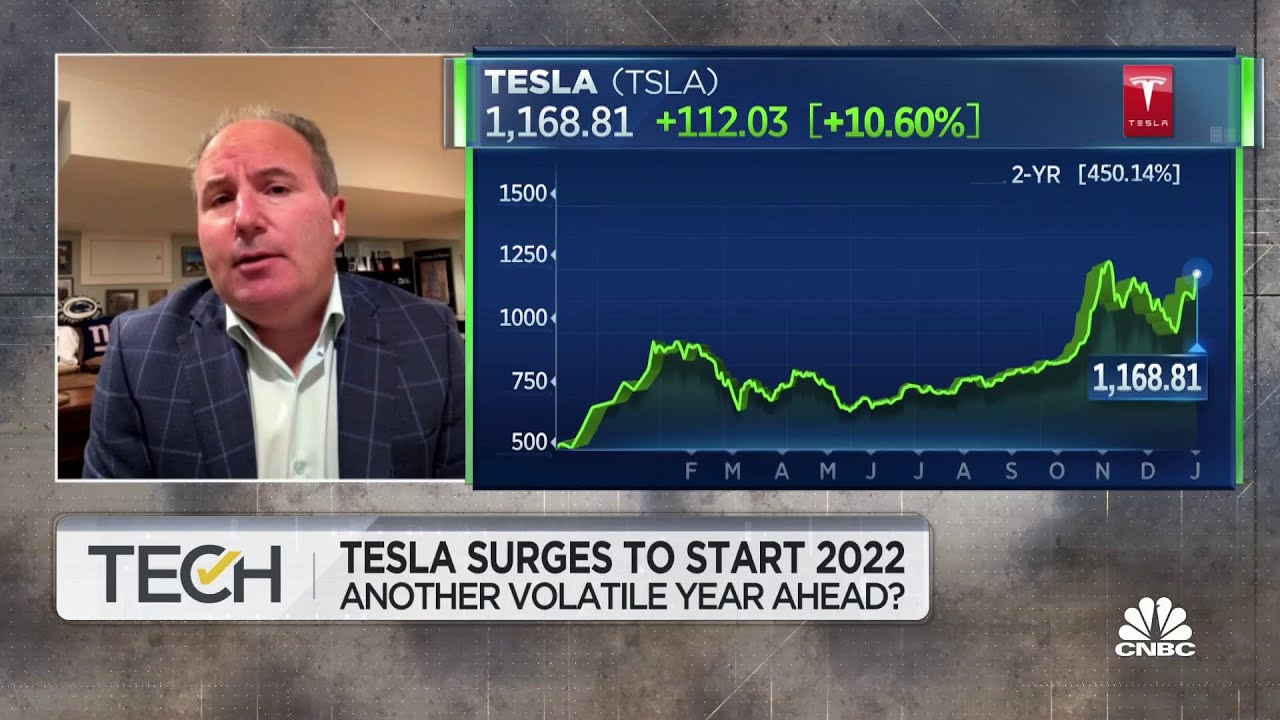 Both the short term and long term trends are positive. This is a very positive sign. TSLA is one of the better performing stocks in the Automobiles industry, it outperforms 88% of 27 stocks in the same industry. TSLA is currently trading in the upper part of its 52 week range. The S&P500 Index however is currently trading near a new high, so TSLA is lagging the market slightly.

There is a support zone ranging from 1060.51 to 1093.95. This zone is formed by a combination of multiple trend lines and important moving averages in multiple time frames. Although TSLA has an excellent technical rating, it does not present a decent entry opportunity at the moment. Prices have been extended to the upside lately. For a nice entry it is better to wait for a consolidation. Click here to sign up for email alerts on when TSLA stock consolidates and is a good long entry.