Fed’s Eric Rosengren was clear in his speech early Friday that rates need to be raised. Mr. Rosengren said that if we don’t raise rates soon, we could crash the economy. Mr. Rosengren said, “A failure to continue on the path of gradual removal of accommodation could shorten, rather than lengthen, the duration of this recovery.”

Fed’s Kaplan (Dallas Fed) spoke about the need to raise rates very slowly but said that the Fed “has put markets on notice.”

Not only do banks need rates to move up as they have suffered for years under low-interest rates, but inflation is also coming on strong.

Jeffrey Gundlach of DoubleLine said last week, “This is a big, big moment.” The bond investor warned his peers that interest rates are ready to rise from their historically low levels and asset managers need to be “defensive.” Quartz writes…

Gundlach said investors should reduce duration in their portfolios, move money into cash and buy protection against volatility before rates rise and inflation picks up.

Gundlach uses the recent jump in the ECRI (index of leading indicators) to suggest that we are about to see more inflation in the US. 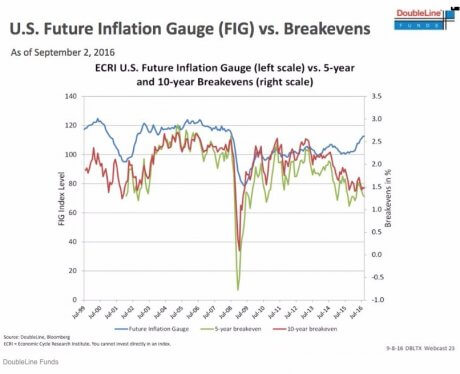 The ECRI US leading index continues to rise so the market should be pricing in higher inflation and therefore higher interest rates.

Consumer credit confirms an overheating market and the likelihood that inflation will explode higher. Consumer credit as a percentage of GDP is exploding higher to levels never seen before. 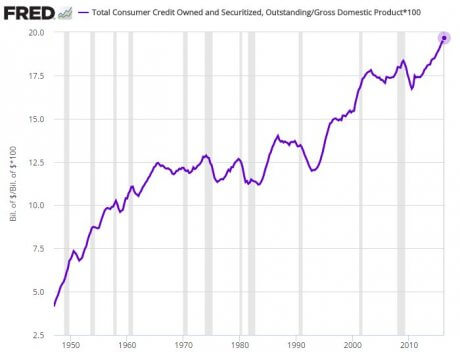