Hot stock picks often have breakout chart patterns but this is one of my least favorite patterns to trade.

The best breakout chart patterns to trade are the ones that come after a long continuation pattern. 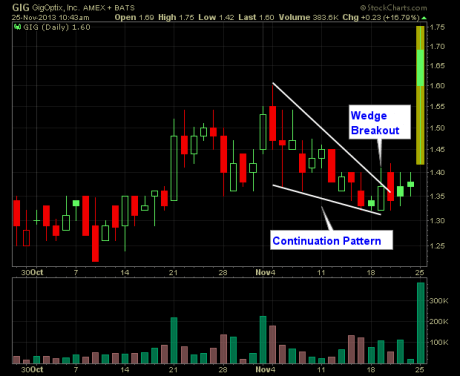 The Wedge, or sometimes called a Falling Wedge, is a bullish pattern that begins wide at the top and contracts as the price moves lower. A Wedge is a continuation pattern. The Wedge does not give a bull buy signal until the breakout. 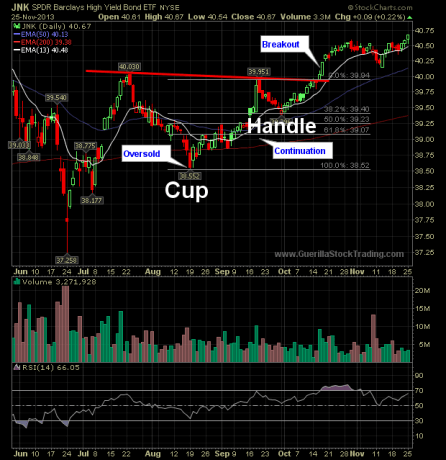 One of the most popular stock breakout patterns is a Cup with Handle pattern. A Cup pattern can form without a handle in which case it’s just a Cup pattern.

The Cup with Handle is a bullish continuation pattern that marks a consolidation period followed by a breakout. 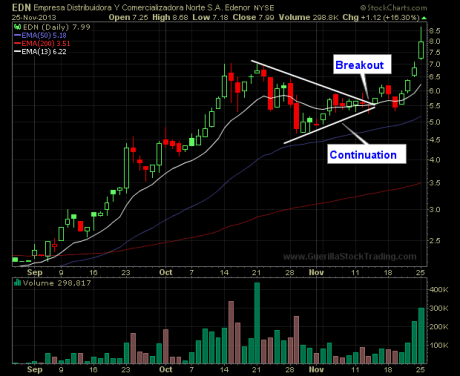 The Symmetrical Triangle, also called a Coil, is another continuation pattern. It is a Wedge pattern but without a slope either up or down. As the price range contracts and moves into the apex of the triangle, the volume should drop. This is the quiet before the storm, or the range contraction and consolidation before the breakout.

What is a false breakout in trading?

A false breakout is when price moves through a resistance level but then does not have enough momentum to maintain its direction. 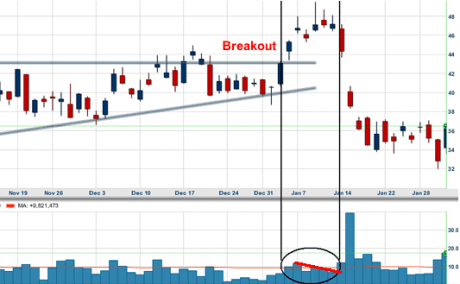 Traders can minimize getting suckered by a false breakout by demanding confirmation of volume on the breakout. In the example above, the negative divergence between price and volume was a warning.

Breakouts are my least favorite pattern to trade because they can end badly with a false breakout, and even if they don’t, you are always arriving to the party a bit late if your entry is the breakout as you chase the stock higher.

Breakouts are notorious for causing traders to blow up their trading accounts.

In addition to volume divergences, traders use moving averages and other technical indicators to minimize false breakouts.

What is a ADX indicator?

The ADX indicator is the Average Directional Index (ADX) indicator that measures both direction and strength of a trend. 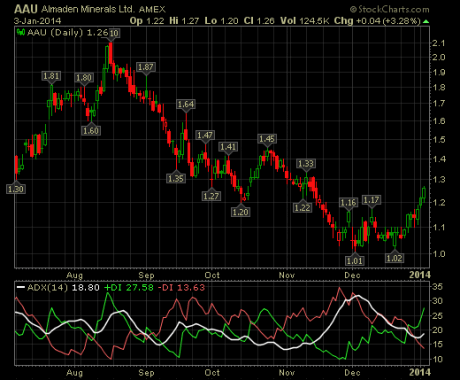 In the chart above, the ADX line is curling up meaning AAU is starting to trend up (because the green line is on top of the red line).

Stock volume is determined by the number of shares traded during a specified period of time. Volume is a graphical representation of the amount of shares exchanged or traded between buyers and sellers.

A stock’s volume is usually plotted horizontally as a histogram bar at the bottom of a stock chart. 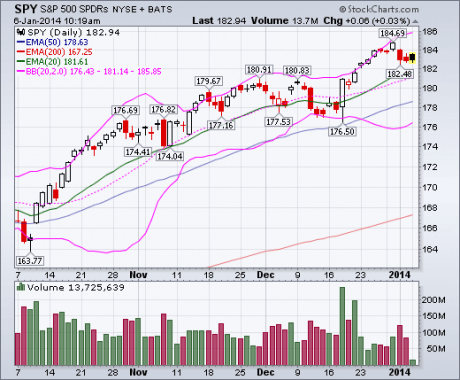 Many stock charting software programs allow you to assign color to volume. In the example above, if the day closed down, the volume is colored red. If the day closed up, the volume is colored green. Most new traders mistakenly think that if the volume histogram bar is colored red, that’s the sell side volume. This is not true. It takes buyers for there to be sellers. It takes sellers for there to be buyers. If you zoom in on an intra-day 1 minute chart, you can see all the different green and red histogram bars that occur throughout the trading day. This is why many traders turn off colored volume because it’s misleading. The volume on a daily chart simply shows the total number of shares that exchanged hands for that day.

Preston Pysh posted the excellent video below called What is Stock Volume.

Why is the volume of shares traded important?

The volume of shares traded is the second most important indicator you have after price. The reason volume is so important is that it confirms trends and chart patterns.

The best way to confirm a breakout is when it happens on rising volume. 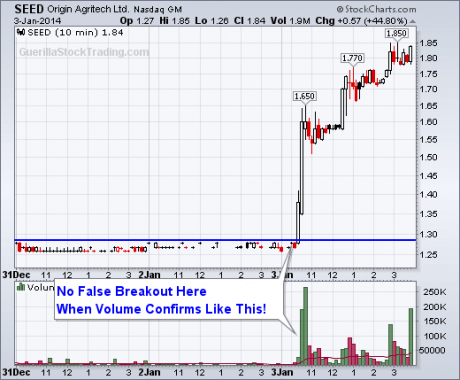 A price move up or down, on high volume, usually means the upward move is stronger and will continue longer.

Marketgauge posted the excellent video below called How to Analyze Stocks Trading on Volume.

Market Geeks posted the great video below called How To Trade Volume Spikes.

What does high volume trading indicate?

High volume trading indicates a big fight taking place between the Bulls and Bears over a certain price level. 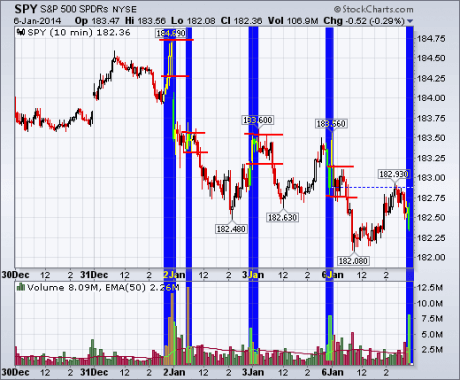 In the chart above, notice the significant consolidation levels that usually form after a good Bull versus Bear fight. You can use that consolidation to mark support and resistance lines and then if price breaks above resistance go long, or if price breaks below support go short. Since most of these volume spikes occur at market open, this explains why the Opening Range Breakout strategy often works.

InformedTrades posted the excellent video below called One Simple Way to Use Volume to Trade Stocks.