GDP contracts from Y to Y1 and wages fall from P to P1. If wages “stick” at P rather than fall to the new equilibrium wage of P1 following a shift of demand, the result will be a much greater unemployment equal to Y – Y2. 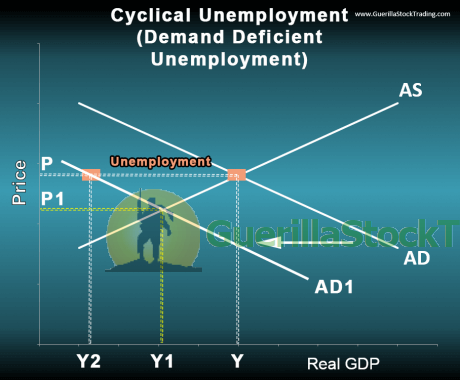 When most traders get the monthly Employment Situation report data of something like 150K jobs created in October, they don’t realize that those are net changes. What actually happened is that there are around 5 million new hires during the month, and 4.85 million new separations (quits or layoffs). The number you hear about each month is the net number or the difference between new hires and new separations. The net number is misleading. The net number hides the vast amount of job change which is happening.

Every month millions of people quit their jobs to get a new job. Some go back to school for more training and some retire. Other people start new jobs after graduating or finding new opportunities. This all leads to frictional unemployment and it’s a healthy part of a dynamic economy.