GDP stands for Gross Domestic Product, and represents the monetary value of all goods and services produced within a country over a specified period of time. GDP is how all countries grow and we track this through the business cycle. The percentage change in real GDP is plotted on the vertical axis, and time is plotted on the horizontal axis. We can see how as real GDP rises and falls over time, the business cycle goes through expansionary peaks and recessionary troughs. We can also see that these short term oscillations occur, around an upward sloping secular or long term growth trend line.

To draw this business cycle, we have to be able to plot real GDP over time. Here is the basic approach most economic forecasters take to calculate GDP:

The four drivers of GDP growth include consumption, investment, government spending, and net exports. Where net exports represent the difference between the exports of a nation, and its imports. If imports exceed exports, a country is running a trade deficit.

At GuerillaStockTrading.com, I track what are called the leading economic indicators, that I use to try and predict movements in the business cycle. 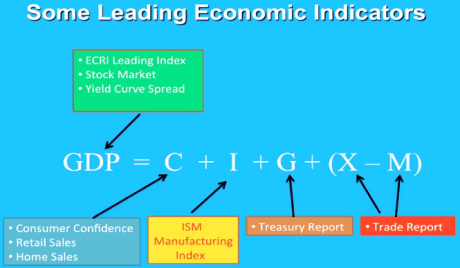 For example, to track consumption, I may watch the Consumer Confidence report closely. The idea is that a more confident consumer will spend more, and therefore GDP growth will increase. Consumer confidence is considered to be a leading economic indicator of future growth.

Similarily to track investment, I may watch a leading economic indicator like the ISM Manufacturing Index. This is a broad and quite accurate measure of the health of the manufacturing sector, and a healthy ISM index with the value above 50, likely means an expanding economy.

I also pay very close attention to inflation by tracking the consumer price index or CPI. If this index shows inflation rising, the Federal Reserve might raise interest rates and thereby slow down GDP growth. Gross domestic product (GDP) is a monetary measure of the value of all final goods and services produced in a period (quarterly or yearly). GDP estimates are commonly used to determine the economic performance of a whole country or region, and to make international comparisons. Nominal GDP however do not reflect differences in the cost of living and the inflation rates of the countries, therefore using a GDP PPP per capita basis is arguably more useful when comparing differences in living standards between nations.

GDP is not a complete measure of economic activity. It accounts for final output or value added at each stage of production, but not total output or total sales along the entire production process. It deliberately leaves out business-to-business (B2B) transactions in the early and intermediate stages of production, as well as sales of used goods. In the United States, the Bureau of Economic Analysis (BEA) has introduced a new quarterly statistic called gross output (GO), a broader measure that attempts to add up total sales or revenues at all stages of production.Mark Skousen was the first economist to advocate GO as an important macroeconomic tool. Other countries are following suit, such as the United Kingdom, which now producing an annual statistic called Total Output.

GDP attempts to measure the “use” economy, i.e., the value of finished goods and services ready to be used by consumers, business and government. GDP is similar to the “bottom line” (earnings) of an accounting statement, which determined the “value added” or the value of final use. GO is an estimate of the “make” economy, i.e., the monetary value of sales at all stages of production. Thus, GO is similar to the “top line” (revenues or sales) of an accounting statement. GDP and GO are not mutually exclusive, but complementary ways to examine what’s happening in an economy.

As Dale Jorgenson, Steve Landefeld, and William Nordhaus conclude in “Gross output [GO] is the natural measure of the production sector, while net output [GDP] is appropriate as a measure of welfare. Both are required in a complete system of accounts.” The largest GDP's by continent are: the United States in the Americas, Germany in Europe, Nigeria in Africa, China in Asia and Australia in Oceania.