The Hanging Man candlestick pattern is a bearish reversal pattern found in an uptrend. Do not confuse a Bearish Hanging Man with a Bullish Hammer. 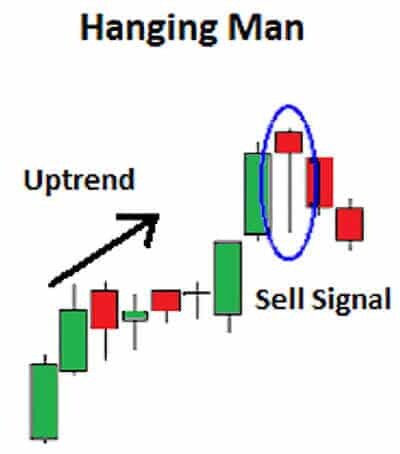 If a hanging man forms at a resistance level, you should take notice of that level.

The Hanged Man (XII) is the twelfth trump or Major Arcana card in most traditional Tarot decks. It is used in game playing as well as in divination.

It depicts a pittura infamante (pronounced [pitˈtuːra iɱfaˈmante]), an image of a man being hanged upside-down by one ankle. This method of hanging was a common punishment at the time for traitors in Italy. However, the solemn expression on his face traditionally suggests that he is there by his own accord, and the card is meant to represent self-sacrifice more so than it does corporal punishment or criminality.[citation needed]

In other interpretations, The Hanged Man is a depiction of the Norse god Odin, who suspended himself from a tree in order to gain knowledge. There is also a Christian interpretation that portrays Judas, and include the bags of silver in his hands.