Those who hold gold and want it to go up, have claimed for years that the Federal Reserve is part of a gold “rehypothecation” scheme where the gold has been pledged as collateral to another.

Some perma-bear/gold and silver blogs like to publish fantastic stories about how all the gold held by the Federal Reserve was tied up backing the U.S. dollar, but when the dollar was taken off the gold standard in the 1970s, now all that gold was sitting there doing nothing and that’s when the Fed created this rehypothecation of gold scheme. 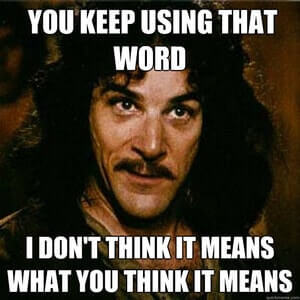 Folks, that’s a big bunch of crab-cakes. There is no such thing as a grand conspiracy of gold rehypothecation. What there is, is the fractional reserves system. The fractional reserves system was created by gold producers and gold traders themselves hundreds of years ago, long before the U.S. dollar was taken off the gold standard! To believe that the Fed is executing on some evil gold rehypothecation scheme in the wake of the dollar being taken off the gold standard in the 70s, you would have to not know the history of gold and how it became money, and you would have to have a very poor education in macroeconomics.

I have said this a dozen times before, and I will say it again. Be very careful where you get your education in economics from because your stock trading business just might depend on it.

The Goldsmiths Create The First Form of Paper Money

The best way to think about this is to go back several hundred years to England when commodity money such as gold, was the prevailing medium of exchange and goldsmiths emerged as the first commercial bankers.

In this earlier era, people didn’t like to carry around all their gold or leave it sitting around the house because it was cumbersome and might even get stolen, so people asked their goldsmiths to store it. The Goldsmiths’ intern would give the gold depositors a paper receipt, and when a depositor needed to get some gold to make a purchase, he or she would use that receipt to redeem the gold.

Now, over time, three important things happened with this system.

#1 – Gold depositors figured out that they could trade their gold receipts for goods rather than go back to the goldsmith to redeem the paper every time they needed to make a transaction. These receipts functioned in effect as the first paper money.

#2 – The gold depositors soon figured out that they didn’t have to leave their gold with the goldsmith for free. In fact, it wasn’t long before goldsmiths began competing for depositors’ gold. In those good old days, they didn’t offer fun entertainment passes and rebates to open an account. They did offer people interest on their gold deposits.

#3 – Finally, the goldsmiths figured out that they could operate under what is today called a system of fractional reserves. For example, they might take in $1,000 of gold deposits and issue receipts for that amount to the depositors. However, they then might turn around and also issue another $1,000 in gold receipts as loans to other people, even though they didn’t have enough gold deposits to redeem all the receipts that they issued. The goldsmiths could operate this way because it was highly unlikely that everybody who held the $2,000 of receipts would all come in at once to demand their gold.

There is your origin of “gold rehypothecation”. There is no such thing as gold rehypothecation. There is only the fractional reserves system that was created by gold producers and gold traders hundreds of years ago, and that practice continues today. This is basic macroeconomics folks.

In the example of the goldsmith above, the implicit fractional reserve is 50%, or 0.5. 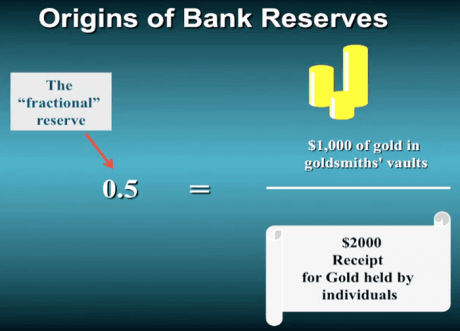 At this level, the goldsmiths would issue twice as many receipts as they had gold deposits for, and such a system allowed the goldsmiths to expand the supply of money over and above the amount of gold reserves they held in their vaults.

Today’s modern banks function much like the goldsmiths of old, and you can see now how such banks can create money.

Suppose, for example, a person deposits $1000 in Bank 1. This table shows the balance sheet for Bank 1 in this initial position, where both reserves and deposits are $1000: 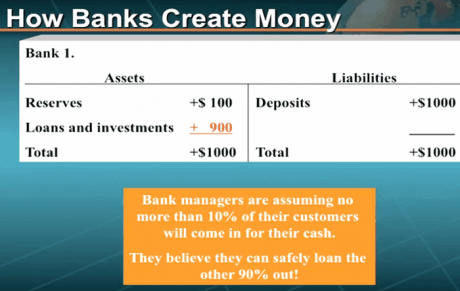 Now suppose further that the bank’s Board of Directors decides that they are going to maintain a fractional reserve, or reserve requirement, of 10%. This means that the board of directors is betting that no more than 10% of their depositors will come in and demand their money at any one time. This in turn means they can lend out at least $900 of the new $1,000 demand deposit. This table shows Bank 1’s balance sheet after making such a loan:

At this point, the borrower from Bank 1 deposits the money in Bank 2, and this is reflected in Bank 2’s initial balance sheet in this table: 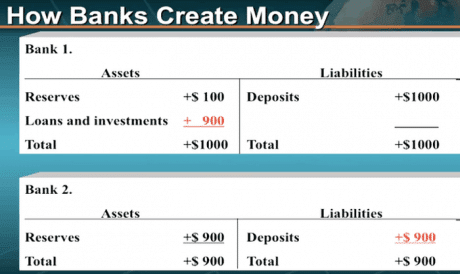 Now Bank 2 also has a 10% reserve requirement and so it can lend out funds, $810 to be precise, as indicated by Bank 2’s final balance sheet in this table:

See also
S&P500 Biggest Gain Since 2020, CPI Cause and Effect and Institutional Investors 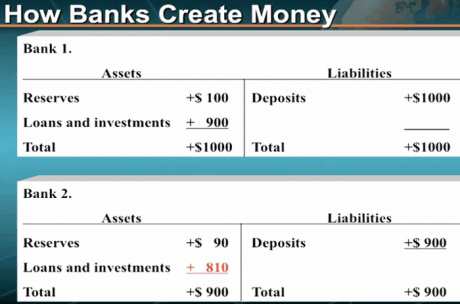 By now you get the picture. When $810 is deposited in Bank 3, Bank 3 lends out $729. Bank 4 lends out $656, and so on. From this table, you can see how the actions of all the banks together produce what is called the multiple expansion of money: 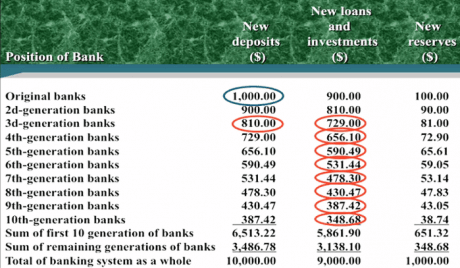 The final equilibrium is reached when every new dollar of original bank reserves supports $10 of demand deposits. Through this expansion, the original $1,000 demand deposit creates an additional $9,000 of new loans and investments, and a total of $10,000 in new deposits.

The money supply multiplier is simply one divided by the banks required reserve ratio: 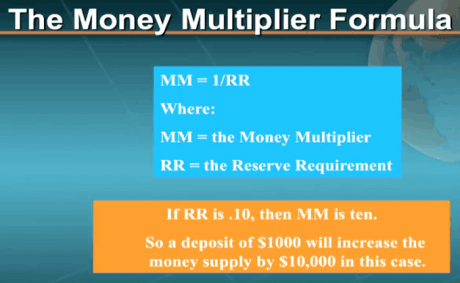 The bigger the reserve requirement, the smaller the money multiplier and the less money that is created by a new dollar of demand deposits.

You might want to know where in the example above the $1000 of paper money that was deposited in Bank 1 originally came from. In the U.S., the answer is the Federal Reserve, the nation’s central bank. Through its control of bank reserve requirements, the Federal Reserve sets the level of interest rates and has a major impact on output and employment.