President Obama has run the national debt up to nearly $20 trillion, more than all President’s before him combined. This expansionary fiscal policy has crowded out private sector investment.

Crowding out is the offsetting effect on private expenditures caused by the government’s sale of bonds to finance expansionary fiscal policy. When the Federal government borrows money to finance a budget deficit, the U.S. Treasury sells IOU’s in the form of bonds or treasury bills directly to the private capital markets and uses the proceeds from the sales to finance the deficit. The Federal Reserve is out of the loop as the U.S. Treasury is competing directly in the capital markets with private corporations, which may also be seeking to sell bonds and stocks to raise money to invest in new plant and equipment.

To compete for these scarce investment dollars, the Treasury typically must raise the interest rate it is offering in order to attract enough funds. This means that running a deficit is largely a zero sum game. The money used to finance the deficit is money that would otherwise have been borrowed and spent by corporations and businesses on private investment. This is how deficit spending by the government is said to crowd out private investment. This crowding out effect is illustrated by these two figures.

I believe that substantial crowding out has occurred during the Obama Administration and their expansionary fiscal policy which has reduced the velocity of money. 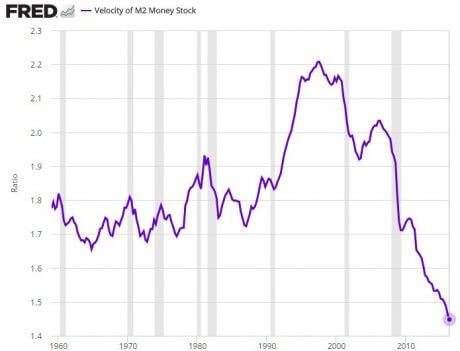 Banks don’t need savers money because they have large surpluses of cash and can borrow money cheaply from the Federal Reserve; thus savers are penalized as they are paid very low-interest rates on their savings.

The next President of the United States needs to reverse course in my opinion and reduce the crowding out effect to get the velocity of money going up again. The way to do that is to stop using fiscal policy and government spending to drive economic growth. In the GDP formula: GDP = C + I + G + (Exports – Imports), the reliance on fiscal policy should be reduced because increases in G (government spending) are largely being offset by declines in I (investment by businesses).

Unfortunately, most modern Keynesian economists recognize the possibility of crowding out, but they do not think it is a major problem when business borrowing is depressed because that’s what usually happens in a recession; therefore, an activist expansionary fiscal policy is appropriate.