Illegal immigration negatively impacts the hourly wage of US citizens. Illegal immigrants are pouring across the Mexico border, and we have no way of counting them but what we can do is track legal immigration from Mexico then double the number for a fuzzy-math estimate. 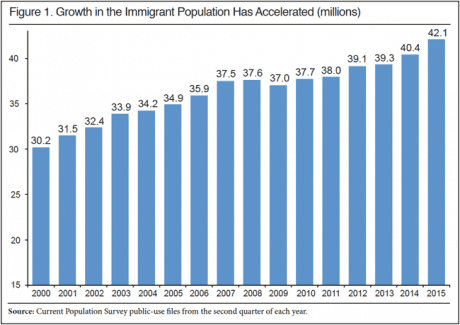 With the flow of millions of illegal immigrants into our country, the labor supply of workers with less than a high school education significantly increases. That puts even more downward pressure on the wages of the poorest Americans. That, in turn, limits their ability to climb the economic ladder. Limiting the number of jobs available for American citizens is not a smart economic policy for the long-term economic development of our nation.

The following graph illustrates the effects of importing illegal workers on the American labor market. 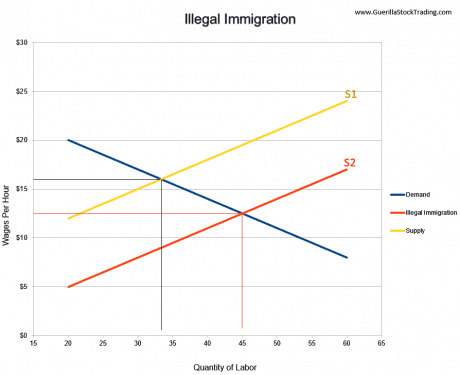 The “Y” axis shows wages paid per hour for a job, and the “X” axis shows the quantity of labor available for that job. Equilibrium (thin black line) is where the supply and demand curves cross. In this hypothetical example, at $16 per hour, there are 33 applications for a particular job.

An increase in the supply-of-labor from illegal immigration shifts the supply curve down from S1 to S2 as available labor rises. A new market equilibrium is established (thin red line). The business listing the job can lower the hourly wage to $13 per hour as there are now 45 applications for the job. 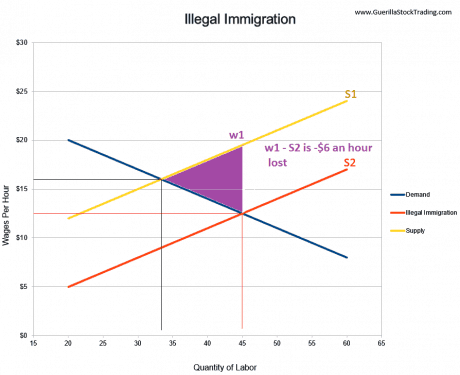 Macroeconomics and the supply and demand graph above proves that the effect of illegal immigration is to shift the supply-of-labor curve downward, causing it to intersect the demand-for-labor curve at an equilibrium point with a much lower wage level and a higher quantity-of-labor level. This shift signifies the willingness of illegal immigrants to perform more labor for lower wages than American citizens. This effect on the labor market affects all laborers, both illegal and legal.

Lower and lower wages caused by more and more illegal immigrants means consumers have less purchasing power because they make less per hour. Businesses will have to lower prices to sell their goods and services which creates a negative feedback loop and deflation. Remember, deflation is a decrease in general price levels throughout an economy. Massive illegal immigration during the Obama Administration explains in part why the Federal Reserve is having trouble getting inflation going (CPI) even after spending trillions of dollars of tax payers money to boost the economy.

It is not true that Americans are “unwilling to take the jobs” in question. The issue is not whether Americans are or are not willing, but at what hourly wage level. In a free market, American citizens have the right not to take a low paying job. In a free market, having some jobs go unfilled because businesses are not willing to pay higher wages is a legitimate outcome.

Illegal immigrants should not be able to compete with American citizens for jobs because their presence in our country is a violation of the law. The number of people granted citizenship in the US has to be at a controlled rate else our economy will crash under the weight of a deflationary spiral. This dire outcome of a deflationary crash is not an opinion but instead fact based on macroeconomics.

We have to get our immigration and borders under control else America’s shining beacon of light will burn out.