On January 10, 2022, Intel announced that David Zinsner has been appointed as the company’s executive vice president and chief financial officer (CFO), effective Jan. 17, 2022. Zinsner has more than 20 years of financial and operational experience in semiconductors and manufacturing, including most recently as executive vice president and CFO at Micron Technology, Inc.

“Dave is a proven finance leader, who brings a unique combination of strategic thought, deep knowledge of semiconductors and manufacturing, capital allocation discipline, and a track record of value creation for shareholders,” said Pat Gelsinger, Intel CEO. “I look forward to partnering with Dave as we continue to execute our strategy to usher in a new era of innovation and achieve our goal of unquestioned leadership in every category in which we compete.”

“I am excited to join Intel, a company I’ve long admired with a storied history of innovation and technology leadership,” said Zinsner. “Intel’s scale, re-invigorated culture and depth of technical talent positions the company to capitalize on the unprecedented demand for semiconductors across the globe. I look forward to working with Pat and the rest of the leadership team to help drive the IDM 2.0 strategy forward and create long-term value for shareholders.”

Prior to his role at Micron, Zinsner served as president and chief operating officer at Affirmed Networks. He also served as senior vice president of finance and CFO at Analog Devices and senior vice president and CFO at Intersil Corp. Zinsner holds a master’s degree in business administration, finance and accounting from Vanderbilt University and a bachelor’s degree in industrial management from Carnegie Mellon University.

As previously announced, current CFO George Davis will retire from Intel in May 2022 and will remain with the company in an advisory role until then to ensure a seamless transition.

Gelsinger added: “On behalf of the Intel team, I want to thank George for his outstanding contributions during a pivotal moment of the company’s history. He has been a great leader and colleague, and we are grateful for the integral role he played on our transformation journey. We wish him all the best in his future endeavors.”

Intel (Nasdaq: INTC) is an industry leader, creating world-changing technology that enables global progress and enriches lives. Inspired by Moore’s Law, we continuously work to advance the design and manufacturing of semiconductors to help address our customers’ greatest challenges. By embedding intelligence in the cloud, network, edge and every kind of computing device, we unleash the potential of data to transform business and society for the better.

A 25-year Intel veteran, Holthaus brings a deep understanding of Intel’s customers and the client computing business based on her current role as EVP and general manager of the Sales, Marketing and Communications Group, a role she has held since 2017, and her previous experience as the head of global client computing sales. Earlier roles in Holthaus’ tenure include leadership of the Microsoft global account team; management of channel products; central marketing and operations for the PC client group; and management of the reseller product group. Holthaus joined Intel in 1996.

“Michelle’s track record of success driving global sales and revenue for the last five years, combined with her profound understanding of the client computing business and trusted relationships across the entire industry, make her a natural choice to lead our largest business,” said Pat Gelsinger, Intel CEO. “Michelle is a proven leader who embodies Intel’s values, and I look forward to partnering with her in this new capacity as we drive innovation and unquestioned product leadership across the client business.”

In her new role, Holthaus will be responsible for all aspects of running and growing the client business, including strategy, financial performance and product development for the full portfolio of client technologies and platforms designed to enable exceptional personal computing experiences.

“I am thrilled to take on leadership of Intel’s Client Computing Group, an organization with immense talent and long history of delivering leadership products and platforms that create vibrant, open ecosystems,” Holthaus said. “We have a tremendous opportunity to build on past successes – and even accelerate our pace as we continue to enable our customers and partners to elevate PC experiences.”

Holthaus replaces EVP Gregory Bryant (“GB”), who will leave the company at the end of January for a new opportunity. Since joining Intel in 1992, Bryant has held numerous roles, including most recently as general manager of the Client Computing Group and previously as the general manager of Intel’s Asia Pacific and Japan region. He led the teams responsible for co-engineering and delivering Intel’s leading consumer and commercial PC platforms, including Intel® Evo™ and Intel vPro® platforms.

Gelsinger added: “I want to thank GB for his outstanding leadership and 30 years of service at Intel, which has seen five consecutive years of business growth and, most recently, the successful launch of the 12th Gen Intel® Core™ family. We wish him all the best in his next endeavor.”

Holthaus will transition to her new role over the coming months as a search for the new leader of Intel’s sales, marketing and communications organization is underway.

Intel erases all reference to China Xinjiang in letter to supplies, WSJ reports

Last month, Intel published an open letter to its suppliers on its webpage telling its business partners to avoid sourcing from the Chinese region of Xinjiang, which sparked social-media outrage in China and led to Intel apologizing, Liza Lin of WSJ reports. Since then, The Wall Street Journal performed a check of the same webpage and letter on January 10 and found the company had removed all references to Xinjiang. The original letter included statements such as, “Intel is required to ensure our supply chain does not use any labor or source goods or services from the Xinjiang region,” which were completely erased in the January 10th version. On Monday, Intel said the company had, “recently issued a statement in China to address concerns raised by our stakeholders there regarding how we communicated certain legal requirements and policies with our global supplier network.” Source: https://www.wsj.com/articles/intel-erases-reference-to-chinas-xinjiang-after-social-media-backlash-11641808676?mod=pls_whats_news_us_business_f

On January 6, 2022, Intel announced a new 12th generation desktop CPU that can increase to 5.5GHz on a single core out of the box, The Verge’s Jon Porter reports, citing the company’s CES 2022 presentation. The full name of the new CPU is the Core i9-12900KS, with the “S” suffix indicating that it will be a limited edition, the author notes. Intel executive VP Gregory Bryant said during the presentation that the chip would be shipping to “OEM customers,” suggesting that, in the immediate future, customers will have to buy a prebuilt PC to acquire one of the chips, the author notes. Source: https://www.theverge.com/2022/1/6/22870060/intel-announces-5-5ghz-capable-12th-gen-cpu

Blackrock and Vanguard likely wanted the old CFO out and so that’s why INTC stock rallied on the new CFO. 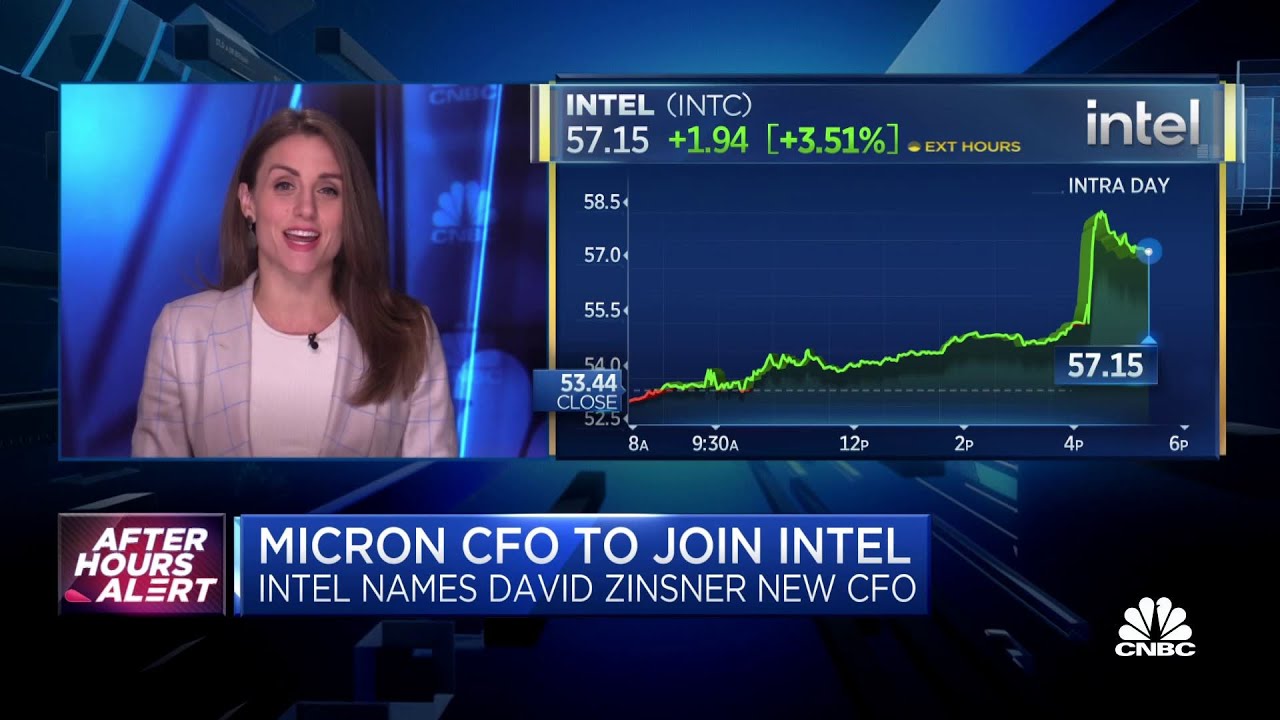 The short-term trend is positive, while the long-term trend is neutral. So this is evolving in the right direction. INTC is currently trading in the middle of its 52-week range. The S&P500 Index however is trading in the upper part of its 52-week range, so INTC is lagging the market slightly. INTC is one of the lesser performing stocks in the Semiconductors & Semiconductor Equipment industry. 66% of 106 stocks in the same industry do better.

There is a resistance zone ranging from 55.22 to 56.01. This zone is formed by a combination of multiple trend lines in multiple time frames. There is also resistance at 57.67 from a horizontal line in the daily time frame.

Although INTC has an excellent technical rating, it does not offer a high-quality setup at the moment. Prices have been extended to the upside lately. For a nice entry it is better to wait for a consolidation. Click here to sign up for email alerts on when INTC stock consolidates and is a good long entry.