The JOLTS Job Openings report showed U.S. companies posted fewer job openings in May but hiring picked up and people are quitting their jobs — both bullish signs for the economy.

New government statistics show American companies have made progress filling their record number of job openings, as hiring rose in May while the amount of job openings in the labor market dipped to just shy of 5.7 million.

There were broad increases in professional, retail, and business services. That narrowed the gap between job openings and hiring, which had raised concerns of a skills mismatch in the market. 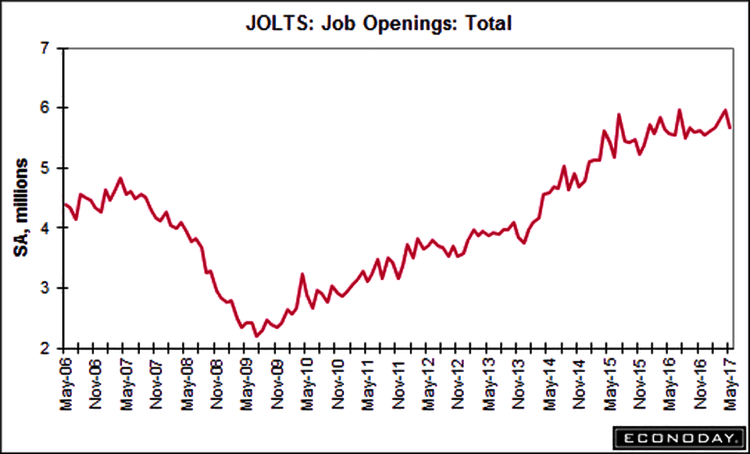 The hiring rate rose two-tenths of a percentage point to 3.7 percent.

The Bureau of Labor Statistics’ monthly JOLTS job openings report — an acronym for Job Openings and Labor Turnover Summary showed openings in May dropped off to the lowest level since January.

The job openings dip in May shows further evidence that the economy is hitting the wall of maximum employment.

This JOLTS job openings report is a sign the market at 4.4 percent unemployment is nearing full employment when almost all people who need a job have one and the unemployment rate mainly reflects the normal churn of people that are temporarily out of work. Usually when unemployment drops this low, companies have to offer more pay. I think faster wage growth is coming.

As the bull economy ages, there is going to be fewer available jobs out there simply because companies have hired all the workers they need for now.

Hiring, meanwhile, surged north of 5.4 million to the highest level the market has seen since December 2015. Substantial upticks in hiring from business and professional services, and educational services, resulted in 25,000 and 121,000 more employees than the month before.

The JOLTS report is among the data watched by Federal Reserve officials as they track both inflation and the labor market.

Quits are typically regarded among analysts as a sign of optimism that employees feel good about their choices.

The amount of people quitting their jobs has increased 7.1 percent to 3.2 million. People usually quit when they either find a new job, often at higher pay, or are convinced they will be hired elsewhere. Quits gauge workers’ willingness to depart present positions in search of higher wages. Coupled with increased hiring across sectors, the equally broad-based increase in the quit rate bodes well for continued wage gains.

Average hourly earnings have failed to break above 2.5 percent on a year-over-year basis. Economists say a growth rate of between 3 and 3.5 percent in salary is needed to bring inflation near the Fed’s 2 percent target.

Layoffs were also up in May at nearly 1.7 million, tying March for the second-worst month so far this year. That’s still a respectable level at this stage in the economic recovery, but layoff upticks were seen across many different industries such as education and health services. Still, current job growth is more than enough to absorb the uptick in layoffs.