Most government revenue comes from the taxation of transactions and labor. Taxes impact both the supply and demand curves. Taxes cause a buyer to pay more for something and suppliers to receive less. The loss of value for both buyers and sellers is called the deadweight loss of taxation. Taxation has an enormous impact on the economy and thus stock market. Traders and investors need to understand the effects that taxation has on the economy and thus stock market. We will examine deadweight loss from a microeconomics perspective, ending with a macroeconomics viewpoint.

In a market without taxation, we will say that a package of socks will sell at a fair market price of $14. This $14 equilibrium price is set where the supply and demand curves cross. 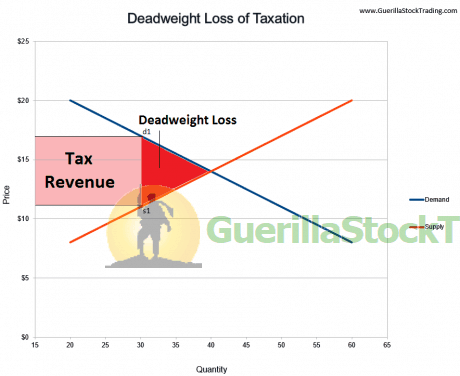 The amount that the government receives in taxes is equal to the buyer’s price minus the seller’s price, multiplied by the quantity of the transaction, whether for goods or services. The area of the light red rectangle is the tax revenue collected by the government. The area of the dark red triangle is equal to the economic value that is lost to taxation.

Products that have good substitutes have a high elasticity of demand, since if the price of one substitute increases, buyers can switch to another substitute. For example, if the price of beef increases, then people will buy more chicken, ham, pork, or some other meat. Beef is considered an elastic product.

Products that have fewer or no substitutes have a high inelasticity of demand since if the price increases, there are no substitute products buyers can switch to. For example, if gasoline and oil prices increase, buyers have to pay the higher price because there are no close substitutes.

Supply elasticity is the change in supply costs at a particular price. If the supply changes little with a change in price, then supplies are considered inelastic. Supply is elastic if there are large changes in supply for a small change in price.

Buyers need to have the product and so changing the price through taxation is not going to change that. For example, buyers need gasoline to operate their automobile. Gasoline is inelastic as there are no substitutes. Raising taxes on gasoline will result in a lower deadweight loss. 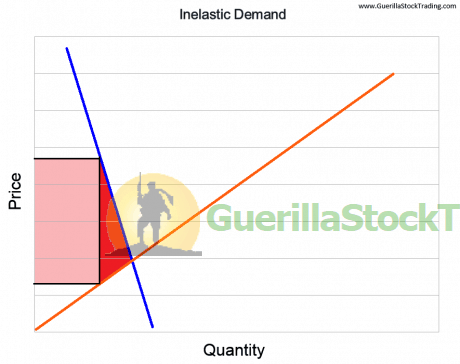 Sellers want to sell land, and so the tax rate is not going to heavily influence the supply of land for sale. The supply of land is inelastic because, as Will Rogers once said, they’re not making any more of the stuff. Raising taxes on land sales will result in a lower deadweight loss. 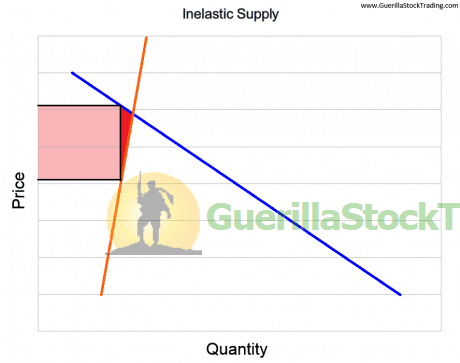 Deadweight loss increases proportionately to the elasticity of either supply or demand. 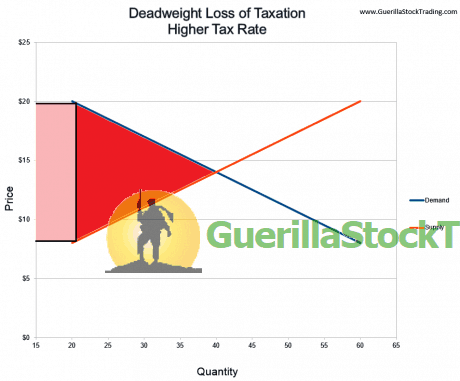 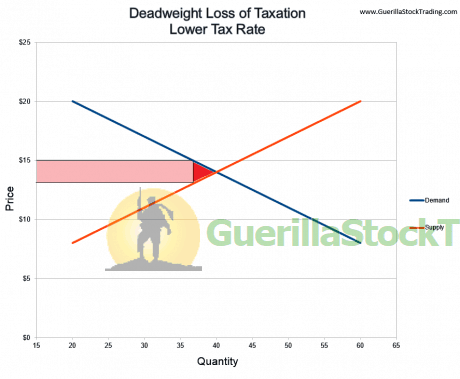 As can be seen from the graph below, as taxes are increased, the deadweight loss of the tax also increases, gradually at first, then steeply as the size of the tax approaches the market price of the product without the tax. Likewise, tax revenue increases at first but then starts to decline as a decrease in quantity more than offsets the increase in the tax rate. 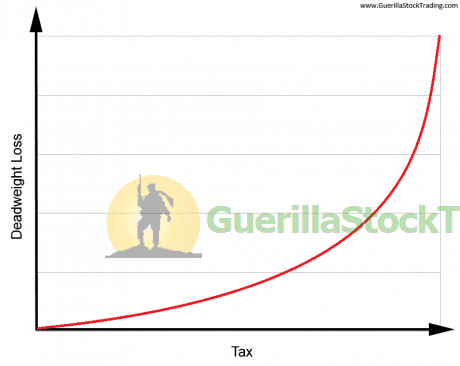 The Federal Reserve has been unable to get the meaningful shift from aggregate demand outward that they wanted to increase GDP. It’s no coincidence that under the Obama Administration, the US has the third highest corporate income tax rate in the world, at 38.92 percent. The U.S. rate is exceeded only by the United Arab Emirates and Puerto Rico. Higher taxes shift the aggregate demand curve inward from AD1 to AD2. 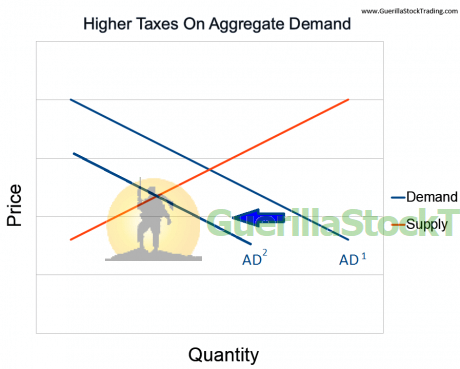 Higher taxes also negatively impact the number of people willing to work as illustrated by the Laffer Curve. 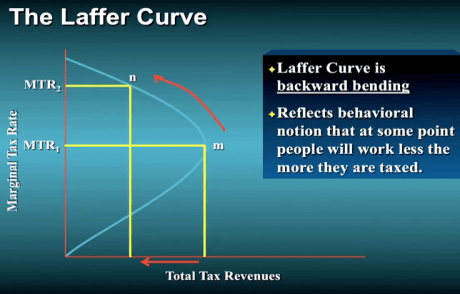 The marginal tax rate is measured on the vertical axis, and total tax revenues are measured on the horizontal axis. Note that the Laffer Curve is backward-bending, reflecting the behavioral notion that at some point, people will work less the more they are taxed. This backward bend means that above a certain tax rate, “m” in the figure, an increase in the tax rate will cause overall tax revenues to fall. Note also, for a supply-side tax cut to increase tax revenues, the existing tax rate before the tax cut must be above “m,” perhaps at a rate associated with point “n” on the curve. The tax rate being above “m” is an important point because, in the early 1980s, the Reagan Administration’s economists believed that the economy was on the backward-bending portion of the Laffer curve (above “m”) and that a tax cut would increase total tax revenues. Based on this assumption, it moved forward with one of the largest tax cuts in American history. 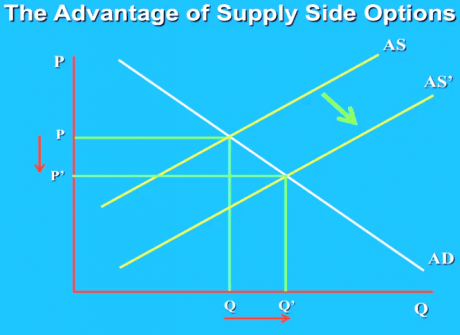 Policies which can successfully shift the economy’s supply curve out, do so with the twin advantages of both lower unemployment and lower inflation.