MSFT stock rose more than 4% in morning trade on January 26, 2022, as growth investors piled into the stock in the wake of its quarterly release.

Microsoft price target raised to $372 from $364 at Morgan Stanley

Morgan Stanley analyst Keith Weiss raised the firm’s price target on Microsoft to $372 from $364 and keeps an Overweight rating on the shares. Declining software asset prices had begun to create an investor narrative of a weakening software demand environment, but Microsoft’s “robust” fiscal Q2 report – highlighted by commercial bookings accelerating to 37% constant currency growth, total revenues up 20% on a constant currency basis and guidance looking for accelerating Azure growth into Q3 – speaks to both the company’s strong secular positioning and a solid software spending environment, Weiss tells investors. A durable high teens total return profile is not reflected in Microsoft shares at current levels, argues Weiss.

Microsoft price target raised to $340 from $330 at Oppenheimer

Oppenheimer analyst Timothy Horan raised the firm’s price target on Microsoft to $340 from $330 and keeps an Outperform rating on the shares following quarterly results. The analyst notes revenue grew by 20% and EPS by 22%, Azure revenue grew 46% and 12% sequentially, versus 48% last quarter on tough comps, on a $45B run rate base. Azure Growth will reaccelerate to 48% next quarter on adoption of very large contracts by very large enterprises, Horan adds.

Stifel analyst Brad Reback said the sequential deceleration in Azure growth in Microsoft’s “strong quarter” created “initial noise in the print,” but these concerns were quickly allayed with management’s guidance for a quarter-over-quarter acceleration in Azure’s constant-currency growth. In addition to the strong Azure guidance, Commercial Cloud bookings grew about 37% year-over-year on a constant-currency basis, pointing to a continued healthy demand environment for digital transformation, Reback tells investors. Microsoft is taking meaningful amounts of market share from legacy enterprise vendors and the “ever-growing backlog of digital transformation opportunities” positions it well to post better than expected top-line growth and “healthy” free cash flow gains, added Reback, who keeps a Buy rating and $380 price target on the shares.

Wedbush analyst Daniel Ives notes that “there are some moments in the financial markets that are pivotal and historical when put in context,” and Tuesday night was one of them when in a white-knuckle market with the whole Street watching Microsoft’s earnings with a close eye, the company gave a robust cloud guidance “for the ages” that will calm Street nerves on Wednesday morning and was a bullish data point for Microsoft and importantly the whole tech sector moving forward. The analyst’s “unwavering view” is that despite the fear in the air given the Fed tightening backdrop and valuations falling off a cliff in tech, underlying digital transformation growth is accelerating and not decelerating into 2022 as part of this 4th Industrial Revolution. Microsoft’s cloud guidance was stronger than the Street and when factoring in F/X headwinds, Ives would characterize this as a “blowout guide” in terms of how investors will digest these numbers on Wednesday. He has an Outperform rating and a price target of $375 on the shares.

Commenting on the company’s quarterly results, Wells Fargo analyst Michael Turrin says that with the tech investing world on the edge of its seat, Microsoft provided a bit of serenity stemming from Q2 commercial bookings strength, Azure long-term deal activity, and a stronger than anticipated Q3 outlook. While a modest Azure deceleration and less upside than expected from the IC segment may have led to some initial questions around pull-forward, answers came quickly via FX headwinds, a stronger than expected IC cloud outlook for Q3, and confidence Azure can re-accelerate growth into Q3, Turrin contends. No change to his positive thesis as he views Microsoft as well-entrenched within several significant end markets, Azure as a share gainer in the cloud IaaS wars, and shares as the cleanest way to play the continued shift toward software and cloud. The analyst has an Overweight rating and a price target of $425 on the shares.

Mizuho analyst Gregg Moskowitz reiterates a Buy rating on Microsoft with a $350 price target following last night’s “solid” fiscal Q2 results. While commercial bookings growth of 37% year-over-year was very strong, Azure revenue growth of 46% was slightly below investor expectations, and intelligent cloud revenue was “surprisingly” only in line with guidance, Moskowitz tells investors in a research note. However, the Q3 revenue guidance was much better than anticipated, and includes expectations for some Azure revenue acceleration, says the analyst. He continues to believe Microsoft’s growth opportunities over the medium-term and beyond are “greater than many realize.”

📺 This Microsoft beat was not what the buy side wanted: Jefferies’ Brent Thill 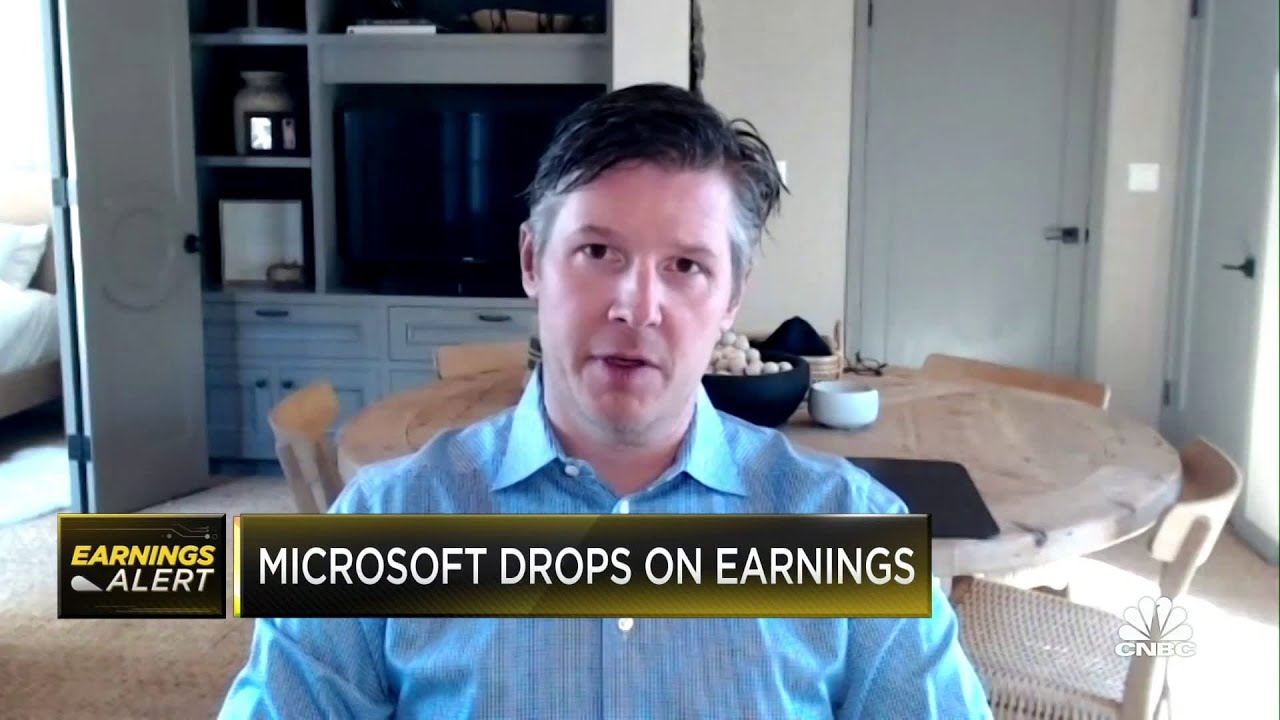 The short term trend is negative, the long term trend is neutral. MSFT is one of the better performing stocks in the Software industry, it outperforms 89% of 350 stocks in the same industry. MSFT is currently trading in the middle of its 52 week range. This is in line with the S&P500 Index, which is also trading in the middle of its range. Volume is considerably higher in the last couple of days.

The technical rating of MSFT is bad and it also does not present a quality setup at the moment. MSFT stock has a Setup Rating of 3 out of 10. Price movement has been a little bit too volatile to find a nice entry and exit point. It is probably a good idea to wait for a consolidation first. Click here to sign up for email alerts on when MSFT stock consolidates and has a Setup Rating of 8 or higher.