The sell-off in technology is more about market reversion to the mean than it is indicative of some gloom and doom scenario where technology stocks lead the rest of the market lower.

Credit Suisse just released a report to clients where they are neutral to slightly cautious on technology stocks for the next 3 months, but remain positive longer out.

There are many bottoms-up drivers in the technology sector right now including the new iPhone, continued increase in cloud usage, greater adoption of artificial intelligence across various sectors, and autonomous driving. Technology adoption and market penetration are likely to increase over the next couple of years.

The S&P 500 is dominated by a few big tech companies. Innovations such as more automation in the grocery industry from Amazon, the iPhone 8, and Tesla’s Model 3 are catalysts for the S&P 500 to move even higher.

Reversion To The Mean 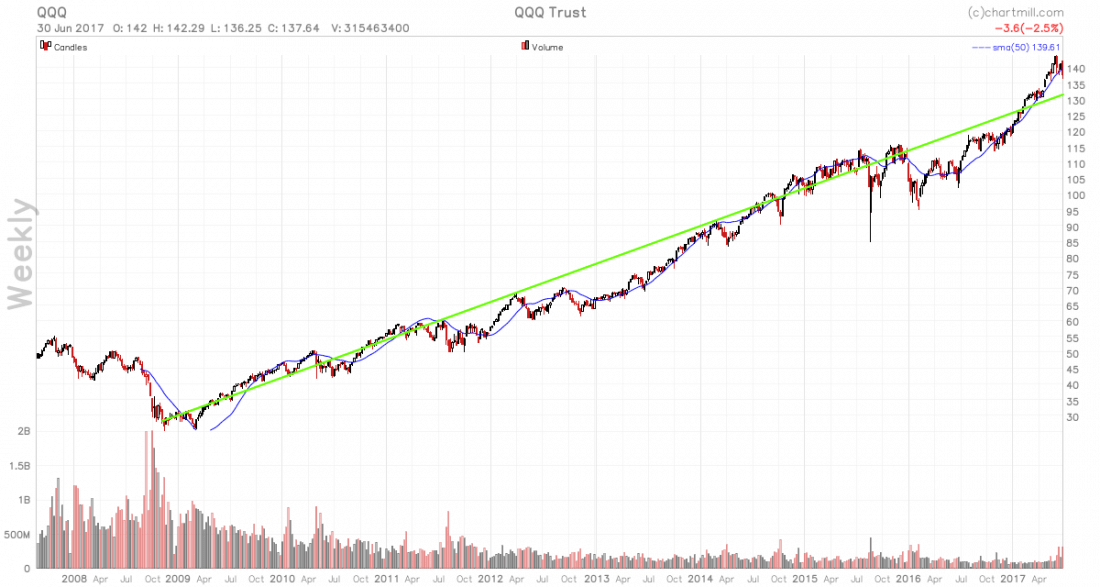 The green line is what I would calculate the mean to be at. As you can see, QQQ has overshot the mean over the last few months and so a move back towards the 10 year mean line is normal.

Fiscal policy will also be a catalyst for continued growth such as tax reform. The medical device tax, investment tax, tanning tax, Medicare Hospital Insurance surtax, the health insurance fee and tax on brand pharmaceutical manufacturers, all will likely be repealed at some point in the future.

Credit Suisse set negative expectations for consumer goods. Stocks that trade in the consumer goods sector are likely going to be stocks we should avoid. Fundamentals and valuation are likely to continue to deteriorate in clothing, department stores, grocery, and packaged food.