Pershing Square writes: “Dear Pershing Square Investor, Beginning on Friday and over the last several days, we acquired more than 3.1 million shares of Netflix, making us a top-20 shareholder in the company. The opportunity to acquire Netflix at an attractive valuation emerged when investors reacted negatively to the recent quarter’s subscriber growth and management’s short-term guidance. Netflix’s substantial stock price decline was further exacerbated by recent market volatility. We have greatly admired Netflix both as consumers and as investors, but have never previously owned a stake in the company. Netflix is a primary beneficiary of the growth in streaming and the decline in linear TV driven by its superior customer experience, a vast and diverse amount of superb, constantly refreshed content, global improvements in bandwidth, and the proliferation and continuous improvement and convenience of devices on which one can watch. We began analyzing Netflix in connection with our investment in Universal Music Group, so we were prepared when the stock price declined sharply last Friday. Now with both UMG and Netflix, we are all-in on streaming as we love the business models, the industry contexts, and the management teams leading these remarkable organizations. In order to fund our purchase of Netflix, beginning on Friday and over the last few days, we unwound the substantial majority of our interest rate hedge generating proceeds of $1.25 billion. We retained interest rate swaptions that are currently out-of-the-money, and also purchased some additional longer-dated, out-of-the-money swaptions. The result of all of the above is that the notional size of our interest rate hedge has been reduced by 80%, the term of a substantial portion of the hedge we retain has been extended, and our dollar investment in hedges has been reduced by more than 90%.” Source: https://www.businesswire.com/news/home/20220126006069/en/

Jefferies downgrades Netflix to Hold, sees too much near-term uncertainty

On January 24, 2022, Jefferies analyst Andrew Uerkwitz downgraded Netflix to Hold from Buy with a price target of $415, down from $737, telling investors that he sees a path to a Buy rating, but “lacks the conviction” given that there is too much uncertainty in the near-term. Current subscribers are “going nowhere” as engagement is strong and churn is low, but the cost of acquiring incremental subscribers has likely become too high as “the best content slate we’ve seen is doing little to drive sub growth,” Uerkwitz stated. His prior Buy thesis was partially predicated on new revenue opportunities in adjacent markets, but on that front, he believes Netflix “isn’t moving fast enough,” Uerkwitz added.

On January 22, 2022, Barron’s writes that Netflix (NFLX) shares have been struggling for months. Heading into this past week’s fateful fourth-quarter earnings report, there were worries about increased competition from Walt Disney (DIS), Apple (AAPL), and others, along with consumers’ reaction to a recent price hike, Eric J. Savitz writes in this week’s edition of Barron’s. As it turned out, Thursday’s report was a big deal, just not in the way that bulls would have liked. Netflix missed subscriber estimates, the only number that matters to investors, the author notes. Netflix shares plunged more than 20% following results, and what makes the whole situation more worrisome is that Netflix couldn’t cleanly explain its soft outlook, Savitz adds. Despite this quarter’s terrible reviews, it might be time to start nibbling, he argues. Source: https://www.barrons.com/articles/netflix-stock-nflx-earnings-51642788908?mod=past_editions

On January 21, 2022, Cowen analyst John Blackledge lowered the firm’s price target on Netflix to $600 from $750 and keeps an Outperform rating on the shares. The analyst lowered his estimate following company guidance including expectations for margin compression largely due to foreign exchange headwinds.

The company said: “We achieved several milestones in 2021: we had the biggest TV show of the year (Squid Game), our two biggest film releases of all time (Red Notice and Don’t Look Up) and Netflix was the most Emmy-winning and most-nominated TV network and the most Oscar-winning and nominated movie studio of 2021. Full-year revenue of $30 billion grew 19% year over year while operating income of $6.2 billion rose 35% year over year. We finished Q4 with 222m paid memberships (with 8.3m paid net adds in Q4). Even in a world of uncertainty and increasing competition, we’re optimistic about our long-term growth prospects as streaming supplants linear entertainment around the world. We’re continually improving Netflix so that we can please our members, grow our share of leisure time and lead in this transition.” 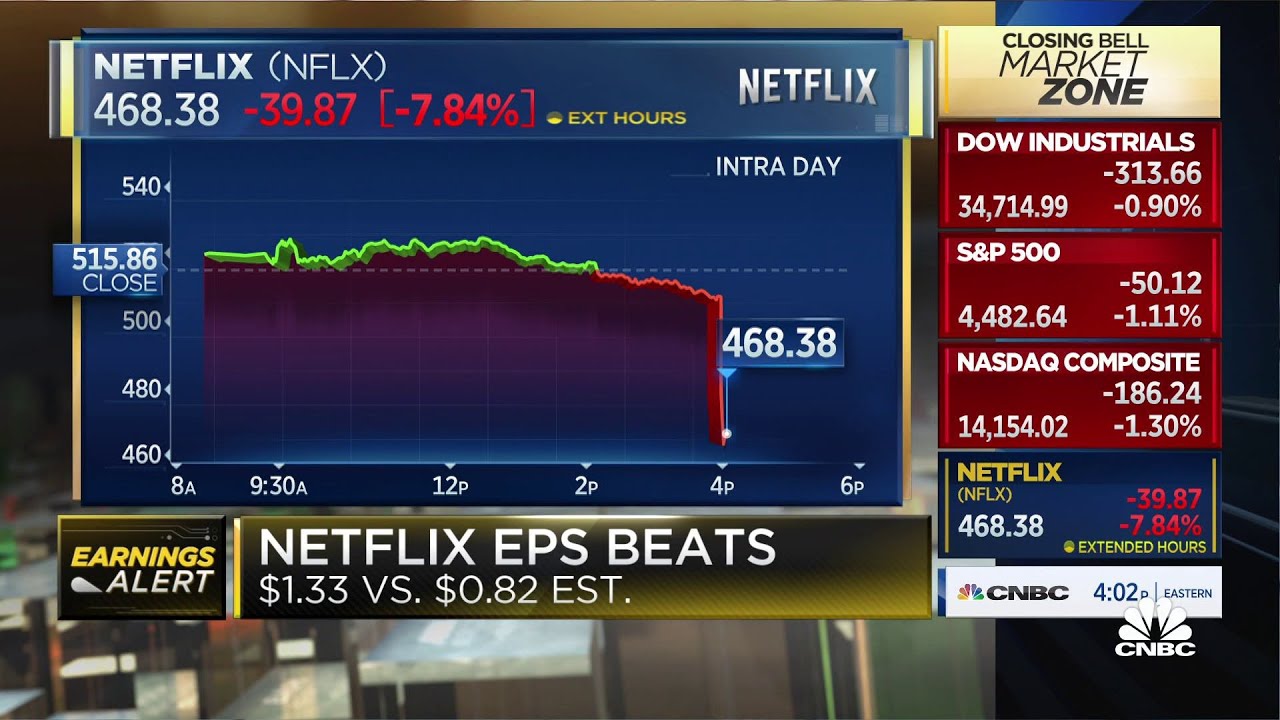 The short-term trend is negative, as is the long-term trend. NFLX is an average performer in the Entertainment industry, it outperforms 47% of 82 stocks in the same industry. NFLX is currently trading near the lower end of its 52-week range, which is not a good sign. NFLX is lagging the S&P500 Index which is trading in the middle of its 52-week range. Prices have been falling strongly lately, it is better to avoid new long positions here. Volume is considerably higher in the last couple of days. In combination with the strong move down this is a bad signal.

There is a resistance zone ranging from 513.47 to 519.20. This zone is formed by a combination of multiple trend lines and important moving averages in the daily time frame.