NFLX stock is being downgraded or having its price target cut by many analysts after the company reported Q4 2021 financials.

The company said: “We achieved several milestones in 2021: we had the biggest TV show of the year (Squid Game), our two biggest film releases of all time (Red Notice and Don’t Look Up) and Netflix was the most Emmy-winning and most nominated TV network and the most Oscar-winning and nominated movie studio of 2021. Full year revenue of $30 billion grew 19% year over year while operating income of $6.2 billion rose 35% year over year. We finished Q4 with 222m paid memberships (with 8.3m paid net adds in Q4). Even in a world of uncertainty and increasing competition, we’re optimistic about our long-term growth prospects as streaming supplants linear entertainment around the world. We’re continually improving Netflix so that we can please our members, grow our share of leisure time and lead in this transition.”

Netflix downgraded to Neutral from Buy at Monness Crespi

Monness Crespi analyst Brian White downgraded Netflix to Neutral from Buy without a price target. The company reported mixed Q4 results and issued a downbeat outlook, White tells investors in a research note. The analyst says “nefarious forces lurk beneath the surface” of the Netflix recovery, either in the form of a weaker than expected global economy or a platform “that has hit a wall in terms of attracting new users in mass.” He says management on the Q4 earnings call lacked the confidence of past gatherings as they “struggled with the exact forces holding back paid net additions.”

Netflix downgraded to Equal Weight from Overweight at Morgan Stanley

Morgan Stanley analyst Benjamin Swinburne downgraded Netflix to Equal Weight from Overweight with a price target of $450, down from $700.

Netflix downgraded to Sector Weight from Overweight at KeyBanc

KeyBanc analyst Justin Patterson downgraded Netflix to Sector Weight from Overweight without a price target following last night’s results. The analyst questions what the right valuation multiple is for a “decelerating subscription business.” Netflix now screens as a “low-double-digit grower” and investors will focus on the degree that paid net adds need to accelerate in the second half of the year to surpass 20M, Patterson tells investors in a research note. He sees few catalysts for the shares.

Netflix downgraded to Equal Weight from Overweight at Barclays

Barclays analyst Kannan Venkateshwar downgraded Netflix to Equal Weight from Overweight with a price target of $425, down from $675, following last night’s results. A lack of growth visibility may not be just a Q1 issue, Venkateshwar tells investors in a research note. The analyst says Netflix’s guidance came in worse than worst-case expectations.

Netflix price target lowered to $550 from $750 at Pivotal Research

Pivotal Research analyst Jeffrey Wlodarczak lowered the firm’s price target on Netflix to $550 from $750 and keeps a Buy rating on the shares. The company reported “an essentially” in-line Q4 and worse than expected Q1 paid subscriber and 2022 financial forecasts, Wlodarczak tells investors in a research note. The analyst believes the pandemic “pulled forward massive amounts of demand for numerous players” including Netflix and across the board it is taking longer than expected for gross subscribers to normalize. He does not view the 2022 decline in operating margins as an issue “as it mostly reflects the effects of the strong dollar.” However, Netflix shares “may be dead money amidst muted results in 1Q and the seasonally weak 2Q and the likely need to prove out that there is still significant growth left in streaming,” adds Wlodarczak.

Netflix price target lowered to $562 from $705 at Piper Sandler

Piper Sandler analyst Thomas Champion lowered the firm’s price target on Netflix to $562 from $705 and keeps an Overweight rating on the shares. Netflix’s Q4 net adds of 8.3M modestly missed Piper’s forecast 8.5M but the Q1 guide of 2.5M sent the stock spiraling 20% lower after hours, Champion tells investors in a research note. While the subscriber view was certainly a disappointment, the U.S. plus Canada region beat expectations in Q4 and globally Netflix’s opportunity “remains compelling,” Champion tells investors in a research note. The analyst says It remains early in the transition away from linear TV and that the company’s opportunities like gaming and merchandising “have yet to take hold.”

Netflix downgraded to In Line from Outperform at Evercore ISI

Evercore ISI analyst Mark Mahaney downgraded Netflix to In Line from Outperform with a price target of $525, down from $710. The company’s Q4 results came in “better than market fears” but the issue is the Q1 sub addition guide of 2.5M, which is less than half of Street expectations and easily the weakest Q1 guidance in many years, Mahaney tells investors in a research note. While there are a “slew of explanations” for the outlook, the negative inflection implied by the Q1 guidance is “very significant,” says the analyst. His fiscal 2022 subscriber adds estimate declines almost 40% from 26M to under 17M.

Netflix downgraded to Underperform from Neutral at Macquarie

Macquarie analyst Tim Nollen downgraded Netflix to Underperform from Neutral with a price target of $395, down from $615. The company’s Q4 results included a “slight miss” on subscribers but more importantly, it guided to a further sub slowdown in Q1 and much lower 2022 operating margin expectations, Nollen tells investors in a research note. The subscriber guidance miss is disappointing and Netflix’s “heavy” content slate after Q1 will weigh on amortization costs, says the analyst.

JPMorgan analyst Doug Anmuth lowered the firm’s price target on Netflix to $605 from $725 and keeps an Overweight rating on the shares. The biggest question coming out of the company’s Q4 earnings report is whether the outlook is thesis changing. It may be on a near-term basis as Netflix “will be in the penalty box,” Anmuth tells investors in a research note. However, the analyst does not believe the quarter is thesis-changing long-term or that there’s a structural shift to the Netflix story. “With a little bit of time horizon, we’d be buying NFLX shares at current levels,” writes Anmuth.

Netflix downgraded to Neutral from Outperform at Credit Suisse

Credit Suisse analyst Douglas Mitchelson downgraded Netflix to Neutral from Outperform with a price target of $450, down from $740. Forward growth expectations are being reset lower following 1Q22 guidance of only 2.5M net adds, Mitchelson tells investors in a research note, adding that while he sees a large TAM opportunity for global streaming and expects Netflix to sustain its leadership position and grow nicely, new platform growth narratives have not emerged for Netflix before this sustained soft patch for net additions has driven a revenue deceleration from 24% growth in 2020, to 19% in 2021, to now an expected 13% in 2022, the analyst tells investors in a research note.

UBS analyst John Hodulik lowered the firm’s price target on Netflix to $575 from $690 but keeps a Buy rating on the shares. The company’s Q4 financials beat expectations, but its Q1 subscriber outlook was soft due to a back-end weighted quarter for content and macro pressure in Latin America, the analyst tells investors in a research note. Hodulik adds however that he remains positive on Netflix’s operating leverage, as its management held its outlook for 300bps of average annual margin expansion.

Netflix price target lowered to $650 from $700 at BMO Capital

BMO Capital analyst Daniel Salmon lowered the firm’s price target on Netflix to $650 from $700 but keeps an Outperform rating on the shares after its Q4 results and guidance. Subscriber growth is being “blunted” by low gross additions, which should renew questions about alternate monetization as a result, the analyst tells investors in a research note. Netflix management is also expected to engage the buyback this quarter, though Netflix’s lack of regulatory risk relative to other FAANGs should be viewed more positively in light of recent Congressional activity, Salmon adds.

Netflix downgraded to Neutral from Outperform at Baird

Baird analyst William Power downgraded Netflix to Neutral from Outperform with a price target of $420, down from $575. The analyst said its mixed Q4 results were disappointing and while global subscriber penetration appears low, the weaker subscriber growth raises long-term growth questions, which he expects to be a significant near-term overhang given the lack of a clear reason, particularly given the recent strong content launches.

Netflix price target lowered to $450 from $580 at Goldman Sachs

Goldman Sachs analyst Eric Sheridan lowered the firm’s price target on Netflix to $450 from $580 and reiterates a Neutral rating on the shares. While the Q4 earnings report was in-line to better than expectations, Netflix was disappointed in terms of its forward commentary on net subscriber additions, which were well below Street estimates, Sheridan tells investors in a research note. Thea analyst sees the Q1 net addition guidance “as an output of slowing activation trends, the potential impact of increased subscription pricing, continued effects of COVID and macro headwinds.” He lowered Netflix’s operating estimates and valuation multiples to reflect slower growth. 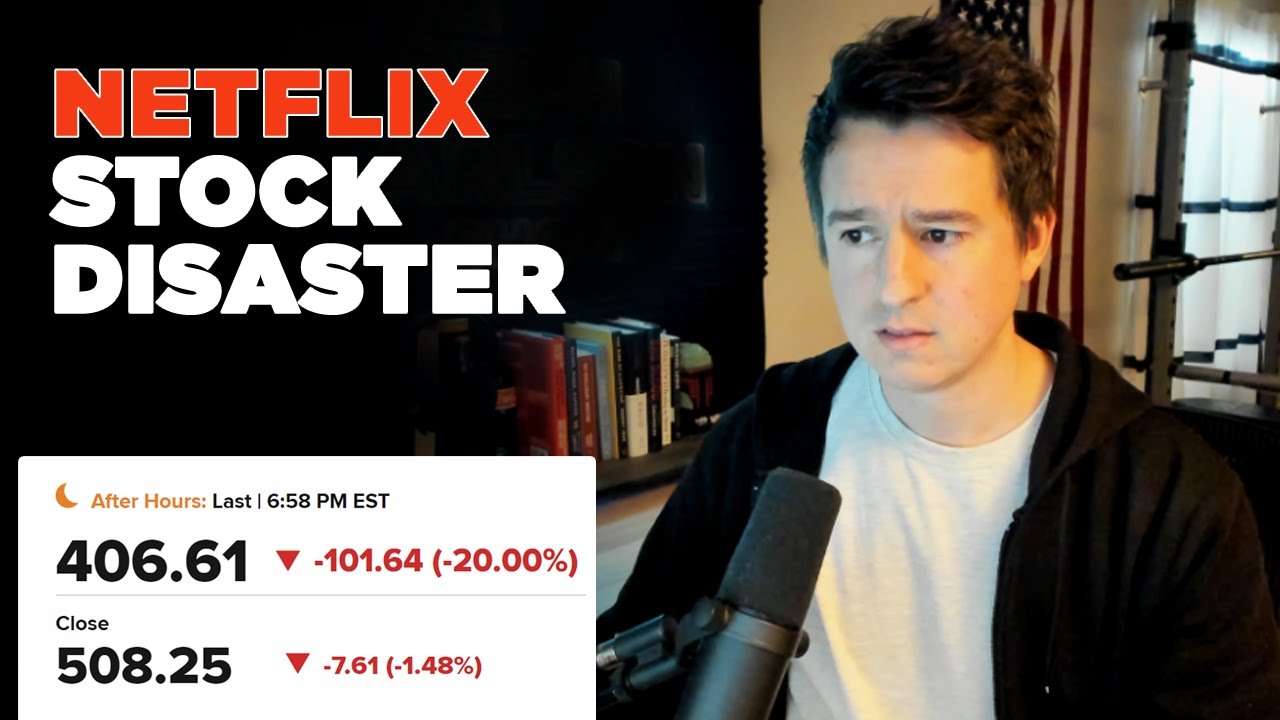 Both the long and short-term trends are negative. It is better to avoid buying stocks with negative trends. Volume is considerably higher in the last couple of days. NFLX is part of the Entertainment industry. There are 83 other stocks in this industry, NFLX did better than 55% of them. NFLX is currently trading in the lower part of its 52-week range. The S&P500 Index however is trading in the upper part of its 52-week range, so NFLX is lagging the market.

There is a support zone ranging from 497.98 to 508.24. This zone is formed by a combination of multiple trend lines in multiple time frames. There is also a support at 475.74 from a horizontal line in the weekly time frame.

There is a resistance zone ranging from 508.26 to 515.87. This zone is formed by a combination of multiple trend lines in multiple time frames.

The technical rating of NFLX is bad and it also does not present a quality setup at the moment. NFLX stock has a Setup Rating of 3 out of 10. Price movement has been a little bit too volatile to find a nice entry and exit point. It is probably a good idea to wait for a consolidation first. Click here to sign up for email alerts on when NFLX stock consolidates and has a Setup Rating of 8 or higher.