NLSP stock rose more than 75% in morning trade on January 4, 2022, after the news hit that the US Patent Office had granted the company a patent for its Mazindol extended-release formulation.

On January 4, 2022, NLS Pharmaceutics Ltd. (NASDAQ:NLSP)(NASDAQ:NLSPW), a Swiss clinical-stage pharmaceutical company focused on the discovery and development of innovative therapies for patients with rare and complex central nervous system disorders, announced that the United States Patent and Trademark Office (USPTO) has granted the Company U.S. Patent No. 11207271, entitled A MAZINDOL IR/SR MULTILAYER TABLET AND ITS USE FOR THE TREATMENT OF ATTENTION DEFICIT/HYPERACTIVITY DISORDER (ADHD). The patent covers oral formulations containing immediate-release and sustained-release layers of mazindol and their use in treating attention deficit disorders (ADD or ADHD), related deficit of alertness or decline of vigilance, or excessive daytime sleepiness including narcolepsy or idiopathic hypersomnia.

“Our intellectual property estate has been significantly strengthened since our initial public offering in February 2021, putting NLS in a solid position as we anticipate reporting Phase 2a results for Quilience® (mazindol ER) to treat narcolepsy in the first quarter of 2022,” said Alex Zwyer, Chief Executive Officer of NLS. “We now have issued patents in major markets including the U.S., Europe, Canada, and South Korea covering our extended-release formulation of mazindol. These recently issued patents augment the Orphan Drug Designations that have been granted for Quilience® in both the U.S. and Europe. Most patients with narcolepsy remain unsatisfied with current treatment options, and we believe that Quilience® has potential to fill a major need in the market given mazindol’s history of safety and evidence of effectiveness in treating the symptoms of narcolepsy. We remain focused on bringing this treatment option to patients suffering from narcolepsy and potentially other sleep-wake disorders as soon as possible.”

NLS Pharmaceutics is a Swiss clinical-stage biopharmaceutical company led by an experienced management team with a track record of developing and repurposing product candidates to treat rare and complex central nervous system disorders. The Company’s lead product candidate, Quilience® is a proprietary extended-release formulation of mazindol (mazindol ER) and is being developed for the treatment of narcolepsy. Mazindol is a triple monoamine reuptake inhibitor and partial orexin-2 receptor agonist, which was used for many years to treat patients diagnosed with narcolepsy in compassionate use programs. NLS has initiated a phase 2 program in the U.S. evaluating Quilience® in adult subjects suffering from narcolepsy. Previously, NLS successfully completed a phase 2 study in the U.S. evaluating Nolazol® (mazindol controlled-release) in adult subjects suffering from ADHD. The study met all primary and secondary endpoints and Nolazol® was well-tolerated. Quilience® has received Orphan Drug Designations both in the U.S. and in Europe for the treatment of narcolepsy. Up to one-third of narcoleptic patients are also diagnosed with ADHD.

On November 30, 2021, NLS Pharmaceutics Ltd. (NASDAQ:NLSP, NLSPW) announced final results from a preclinical study for NLS-4 (Lauflumide), the Company’s next-generation wake-promoting drug candidate. Based on the results, the Company believes that NLS-4 offers promise to become a foundational treatment for the chronic fatigue associated with the symptoms of Long-Covid (also known as “Chronic Fatigue caused by Covid-19 infection”).

The aim of the study was to examine the effectiveness of NLS-4 in comparison with modafinil, a widely-used first-line wake-promoting treatment. NLS-4 is designed to be a more potent next-generation modafinil that does not induce the hepatic toxicity associated with long-term modafinil use. In the study’s Long-Covid animal model, NLS-4 improved circadian rhythm dysregulation and chronic fatigue syndrome (CFS) in subject animals. Based on the results, the Company believes that NLS-4 should improve recovery from CFS in humans at a dose that is four times lower than that used for modafinil.

NLS had previously communicated that Sprague-Dawley rats subjected to a fatigue procedure for 7 days that induced CFS recovered with NLS-4 treatment, and were able to exhibit typical nighttime activity when rats are normally active. The final results confirm that NLS-4 treatment produced an increase in locomotor activity which may reduce the impairment of circadian rhythm at doses four times lower than modafinil. In the study, nighttime activity in NLS-4 treated rats was observed to be comparable to rats that did not undergo the fatigue procedure, the study’s control group.

An increasing proportion of Covid-19 patients are suffering from prolonged symptoms that are typically found in patients diagnosed with Myalgic Encephalomyelitis/Chronic Fatigue Syndrome (ME/CFS). However, the effects of current treatments proposed for this condition have been inconclusive.

“We believe that these final results from this cutting-edge preclinical study confirm that NLS-4 (Lauflumide) expressed motor-stimulating effects, which are superior to the widely prescribed fatigue treatment, modafinil at all doses. The ability of Lauflumide to enable rats that have undergone the fatigue procedure to recover is a strong indicator of the drug’s potential to treat diseases in which CFS is a key symptom,” said Eric Konofal, MD, Chief Scientific Officer of NLS Pharmaceutics. “The fatigue procedure induced a decrease in body weight, and therefore we also examined the weight growth curve in rats treated by NLS-4 at its lowest doses. Importantly, weight loss was not modified by NLS-4 (16 mg/kg). Stimulants commonly prescribed off-label to treat fatigue symptoms decrease appetite and weight loss is a common side effect, whereas Lauflumide at low doses did not cause these issues.”

“Excessive fatigue, daytime sleepiness, deficit of alertness and disturbed sleep are some of the main symptoms found in patients who have contracted Covid-19, and today, there is no approved therapeutic agent for the improvement of the CFS associated with Long-Covid,” said Alex Zwyer, Chief Executive Officer of NLS Pharmaceutics. “We look forward to advancing the development of NLS-4, as the unmet medical need for improved fatigue treatments is growing with more patients surviving infection with Covid-19 and its variants.”

NLS-4 (Lauflumide) is a next-generation selective dopamine reuptake inhibitor. Contrary to modafinil treatment, which can cause hepatic enzyme induction with repeated dosing, NLS-4 did not induce cytochrome P450 (CYP) enzymes, including CYP3A4/5 when tested in human cell cultures.NLS believes that NLS-4 is the only wake-promoting compound without any rebound hypersomnia. This “hypnolytic effect” of NLS-4 is thought to be due to the compound’s ability to prevent increased sleep need following sleep loss as supported by the final pre-clinical results.With the promising results from the cutting-edge preclinical fatigue study in animals, and the apparent absence of CYP450 enzyme induction, NLS-4 appears to have a superior profile compared to the widely used drug modafinil, and potentially represents an important milestone in the development of this next generation wake-promoting agent.

The short-term trend is negative, as is the long-term trend. NLSP is currently trading near the lower end of its 52-week range, which is not a good sign considering that the S&P500 Index is trading near new 52 week highs at the moment. NLSP is one of the worst-performing stocks in the Pharmaceuticals industry. All of the 263 stocks in the same industry do better.

There is resistance at 1.86 from a trend line in the daily time frame.

The technical rating of NLSP is bad and it also does not present a quality setup at the moment. Prices have been extended to the upside lately. For a nice entry it is better to wait for a consolidation. Click here to sign up for email alerts on when NLSP stock consolidates and is a better entry.

Lockheed Martin $LMT Stock Up On EPS and Revenue Beats

Johnson and Johnson $JNJ Stock Up On Bullish Option Flow 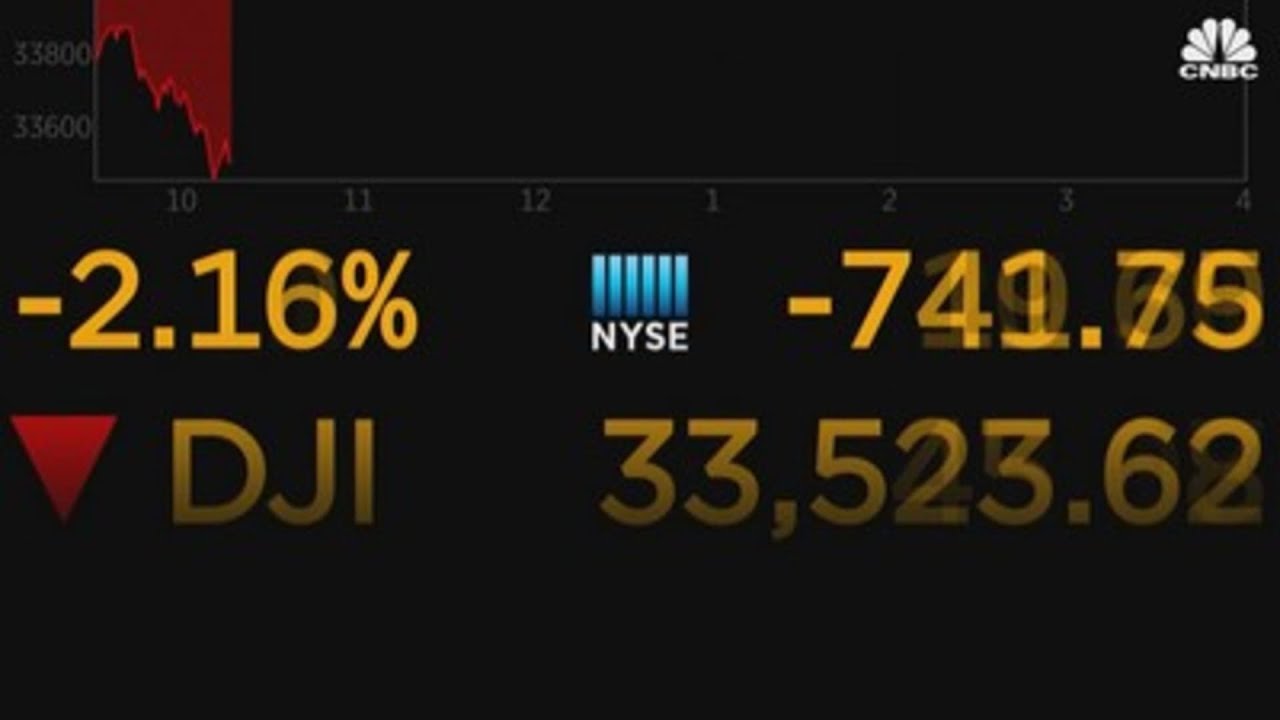 This looks like a hawkish pivot in the market: Ironsides' Barry Knapp
Barry Knapp, Ironsides Macroeconomics director of research, joins 'Power Lunch' to discuss trading opportunities with the Fed's rate announcement tomorrow. For access to live and exclusive video from CNBC subscribe to CNBC PRO: https://cnb.cx/2NGe…

The Fed has to wean the markets off this certainty of forward guidance: Brookings' Wessel
David Wessel, Brookings Institution senior fellow in economic studies, joins 'Power Lunch' to discuss Federal Reserve expectations prior to Wednesday's rate announcement. For access to live and exclusive video from CNBC subscribe to CNBC PRO: http…

Johnson and Johnson $JNJ Stock Up On Bullish Option Flow

DNAC stock is set to uptrend as the ProKidney SPAC and new ticker will go live sometime by Q3 2022.