The Russell 2000 index prediction was very accurate last week as the Russell followed the predicted path (green line) very closely last week as seen in the chart below.

The Russell 2000 is predicted to pullback next week and retest its $140.89 support level by mid-October. Sometime in late October, we will be looking at going long the Russell 2000 index in anticipation of November and the start of the best 6 months of the year for trading.

The candlestick on Friday has a longer shadow on the top than it does on the bottom. That’s a little bearish but hard to tell if that is just from traders going to cash ahead of the weekend news cycle.

Notice the negative divergence on the PPO. Over the last four days, the PPO was falling while the Russell 2000 index was rising. That suggests a pullback is coming. A falling PPO on the Russell 2000 is precisely inline with a market pullback for the week ending September 29, 2017.

I have updated the pullback to be slightly more shallow than last week’s prediction because the Russell 2000 was slightly stronger last week than predicted.

SeeItMarket published a report on what the very low volatility on the Russell 2000 means. I wouldn’t make too much of the low volatility right now on the Russell 2000. Volatility indicators are generally bad indicators to use for timing market swings. I understand the complacency argument but we are in unprecedented times with a President who was not bought by special interest groups and who really wants to help America by doing things that help business. For example tax cuts will really help out small business and thus small cap stocks. In other words, there are numerous positive catalysts from the Trump Administration that will drive small cap stocks higher. I did a lesson on trading catalysts here.

Arguing with what market action is telling us and using volatility as a contrarian gauge for market sentiment in order to time market swings is just not necessary and can be dangerous for your trading account. There are many other prediction tools and charts available that are better at timing market swings than volatility IMO. 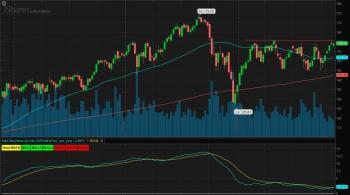 At Market Tops, Fewer Stocks Participate In The Uptrend

At Market Tops, Fewer Stocks Participate In The Uptrend