With the deflationary tsunami that spread outward from China and hit the entire planet, the bigger threat is deflation.

Deflation occurs when the inflation rate falls below 0% (a negative inflation rate). Inflation reduces the value of currency over time, but sudden deflation increases it.

The biggest threat that the Federal Reserve and central banks around the world are not talking about is the deflationary wave that slammed into the U.S. from the coronavirus pandemic.

People are still be forced into sheltering in place and to deviate from their spending habits.

The Federal Reserve, not publicly saying this, believes that the sudden deflationary shock is a huge problem because it increases the real value of debt, especially if the deflation is unexpected. Deflation may also aggravate recessions and lead to a deflationary spiral. It’s very important that Premium members of GuerillaStockTrading understand this concept.

When a recession is expected, and we have a gradual slowdown in consumption, businesses adjust. They might pay off debt. They certainly are more likely to reduce debt. They hold off on expensive CAP Ex spending plans and so on. When the deflation is unexpected, businesses are caught off guard and had no time to react or adjust to the sudden drop in consumption of their products and services. This can make a recession much worse than a typical recession.

The worst thing that anyone can do right now is to advocate for austerity measures in a deflationary environment. Folks, Rand Paul is an economic idiot. So many people think Rand Paul is smart but he’s not and this pandemic has proven that point. Peter Schiff is an idiot too. Schiff is advocating that the government spending which is seeking to induce inflation, is going to make the problem worse. Not too many stock traders  listen to perma-bear Schiff anymore after he missed the biggest bull market run in U.S. history that lasted 9 years. Watch out for Rand Paul like morons pushing austerity right now. That will push the economy into a severe Depression and we have enough financial history to say that with 100% accuracy. To combat deflation, there has to be a wave of inflation and that must be done at both fiscal and monetary levels. Yes, creating a wave of inflation that big has its own bad side effects and those will need to be addressed but it’s much better than causing a Depression and killing the economy.

Why the President is not enacting a strong Federal government response is because of his Republican ideology that bigger government is bad. We have millions of people out of work and we need labor to improve testing, contact tracing, and the disinfecting of our cities. Keep the $600 extra per week but order these people to work (if they do not have a disability or are too old) if they want to continue receiving that money.

“Financial repression is acting as a new form of taxation,” says Paul Donovan, as he discusses the need for austerity measures in the U.S. and how markets are reflecting the coronavirus pandemic. He speaks on “Bloomberg Surveillance.” 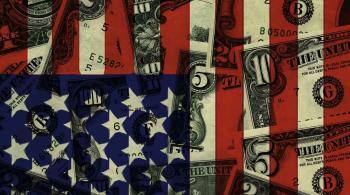