Stocks will base or go sideways, then break either up or down. This makes the basing pattern or the consolidation pattern a great money making pattern.

On May 1, 2013, I made a killing in JRCC using the basing pattern. A basing pattern is a sideways move accompanied by a big drop off in volume. The volatility and beta on the stock drops below its average as the stock appears to flat-line with little interest from traders. 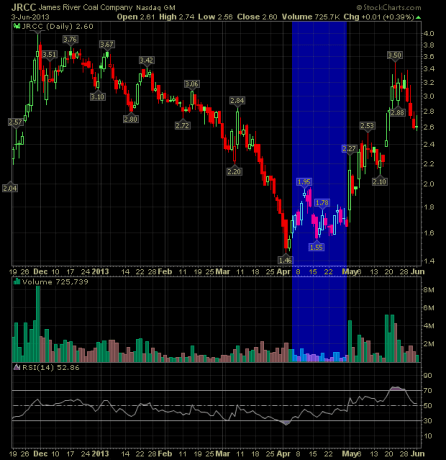 Notice the basing pattern that is highlighted in blue on the chart above. Notice how the volume dropped off as the price chopped out and went sideways. That’s a classic basing or consolidation pattern that when you see it, you should move on the stock if a good catalyst is present.

A sideways consolidation or basing pattern in the larger market is a great time to measure the relative strength of a stock you might be stalking. 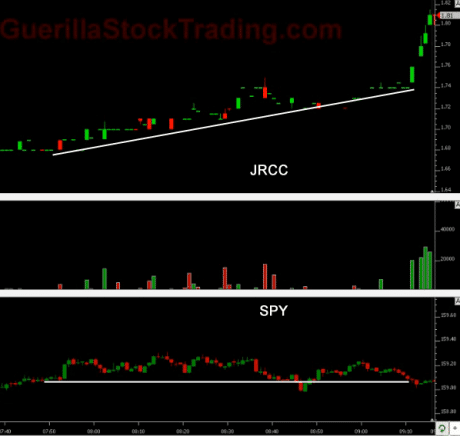 Notice that when you compare JRCC to SPY, while SPY (S&P 500) was consolidating, JRCC has a clear upward bias to it while SPY is basing sideways. Think about what this means. It tells you that while bulls and bears have battled to a stalemate in the larger market, the bulls are clearly winning the battle in JRCC. It means that a huge move could be coming in JRCC because, all else being equal, if there is this much buying in JRCC when there are not a lot of buyers in the larger market, when the buying does come back to the larger market, JRCC could explode higher. That’s exactly what happened. 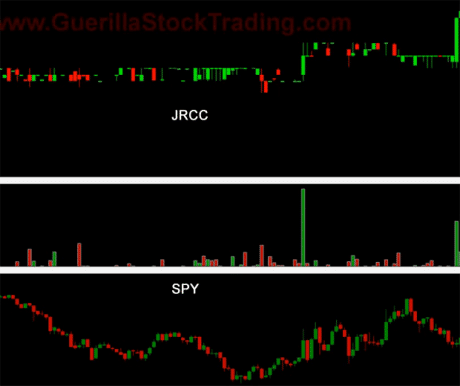 You can see on the far left of the chart above, as SPY went lower, JRCC was basing. This is a positive divergence between JRCC and SPY. Then, later on this chart when SPY started moving up, JRCC exploded higher.

What is a consolidation pattern?

A consolidation pattern, also called a base, is a sideways price action on the chart with lower volatility and a small range between swing move highs and swing move lows.

Periods of consolidation end with a breakout either to the upside or downside which is why traders often enter on consolidation patterns.

The psychology behind the consolidation pattern is usually indecision as neither Bulls nor Bears have control.

What is a basing pattern?

A basing pattern is a sideways movement on a chart characterized by a very tight trading range.

The basing pattern is sometimes referred to as flat-lining.

The psychology behind the basing pattern is indecision. This is why the volume typically drops off when a stock is in a basing pattern.

Traders like to enter on basing patterns because, like consolidation patterns, they end in either breakouts to the upside or downside. 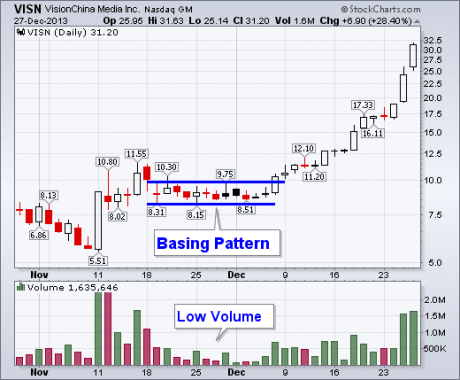 MorpheusTrading posted the excellent video below on basing patterns called How To Find Breakout Setups.