I have two big and painful losses this last week in USAT and RGSE. USAT is being cut for a -40% loss and RGSE is a -15% loss. I’m removing both stocks from the long-term buy and hold portfolios.

I’m completely out of the market now.

USAT was less than honest about its revenues from previous quarters and that revelation caused the stock to collapse -50% in a single day as short sellers piled into the stock.

Lots of people on StockTwits are saying that the USAT situation is no big deal. I thought that too on Thursday when the stock price collapsed so I was looking for a quick bounce, maybe even within minutes. It never happened. Then on Friday, we barely got a dead-cat bounce. It’s not true that the horrendous sell-off in USAT is no big deal. We know this because USAT did not do a sharp V bottom bounce after the so-called overreaction. Listen to what the wisdom of the market is telling you. You’re not smarter than the combined wisdom of millions of traders gambling in the stock with their own hard earned money. You are never smarter than the market. The stock has collapsed -50% for a reason and you’re just in the denial box.

RGSE announced that they are downlisting from the Nasdaq to the OTC market after not being able to comply with the $1 per share minimum requirement. In truly disgusting fashion, the company says, “Nasdaq advised RGS Energy on February 6, 2019, that an extension would only be considered if the company would commit to effect a reverse stock split, if necessary, to meet the $1.00 minimum bid price requirement. The company believes that, under the circumstances, a reverse stock split is not in the best interest of it shareholders and will move trading of the company’s Class A common stock to the OTCQX®, the highest market tier operated by OTC Markets Group.” You would have to know anything about this history of the company to believe that they are against reverse stock splits. RGSE has been the King of reverse stock splits for years which is one of the reasons why the stock went from more than $100 a share to just pennies. The other reason is poor management and business decisions IMO.

One anonymous poster on StockTwits claimed, “The OTC downlisting is just like the company is putting on new shoes but nothing else changes.” 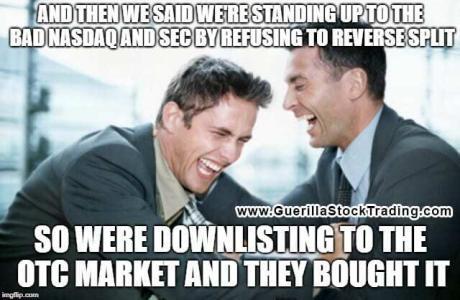 Why do you think the OTC markets exist if the filing requirements are the same as they would be for the Nasdaq? The SEC warns:

“While companies that trade their stocks on major exchanges undergo a formal application process and must meet minimum listing standards, companies quoted on the OTCBB or the OTC Markets do not have to apply for listing or meet any minimum financial standards.”

“In contrast to securities listed on U.S. stock exchanges, securities on the OTCQX, OTCQB and Pink markets may trade without being registered with the SEC.”

Money managers and institutional investors will not buy OTC stocks because of the reduced SEC disclosure filings.

Follow me
Latest posts by Lance Jepsen (see all)